Bathroom in Hard Rock Casino in Tampa is Swanky, But Also Soaked with Spilled Liquids 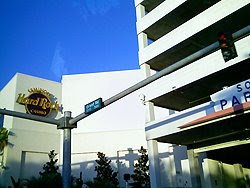 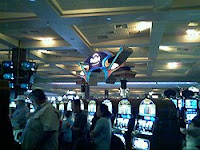 This toilet is on the west end of the complex, just a short distance away from Floyd's, the establishment's nightclub and late-night high-end dining spot. Best way to get to this restroom is to first find Floyd's, then with your back to Floyd's entrance go to your right, following the perimeter walkway of the casino.

Note: You can't see the entrance to the bathroom from the entrance to Floyd's because there is a wall of slot machines blocking your view, but if you follow the perimeter walkway in that direction, you'll see it as soon as you turn the corner. 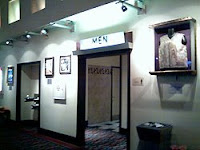 This casino hotel has been around nearly 10 years (I think?) and in that time it has transformed itself from a kitschy Cracker-themed gambling hall and concert venue to something on par with some of the nicer-but-smaller venues in Las Vegas. On my first visit there, years back, I was mesmerized by a game in which you played tic tac toe against a live chicken in a box -- at a cost of $5. Nowadays, the chicken game is gone and a slick array of new Vegas-inspired slots fills the place, along with plenty of swanky rock and roll decor. 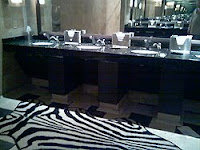 Sure, the place is based on the Hard Rock Cafe design motif, but here the memorabilia seems to play second fiddle to the many gaming options, which literally overstuff the gambling floor. Not that the decor isn't there -- there are glass cases and displays everywhere, don't get me wrong -- but it's not as noticeable when compared to the barrage of flashing lights that hits you from all angles.

Of course, in its latest incarnation, the place has more similarities to Vegas than ever before, from decent dining options to shows to table games (the first incarnation had only slots, and though the slots still outweigh the tables significantly, you can see the tables becoming more predominant in coming years). 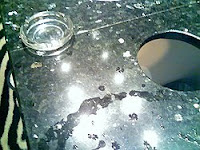 It's also a somewhat smokey place -- but then, what casino isn't? Still, if you can put up with that, and the with the huge numbers of people who crowd the place (especially on weekends), then you should have a fine time here. Not exactly a place for the rock and roll historian to connect to his favorite classic groups (though there is plenty to see in terms of memorabilia) but still an enjoyable place to make a slow afternoon more exciting and lose some money quickly.

The bathrooms here seem to be modeled after a combination of several glam rock stars, like modern-day Steven Tyler and KISS, among others. Outside the entrance are displays containing outfits worn by various rockers (can't remember who, though, I'm afraid). Inside, the color scheme and design will have you thinking you've stepped into a dressing room of sorts -- it's a somewhat predictable design move but still its executed well enough that you give a knowing smile once you step inside. 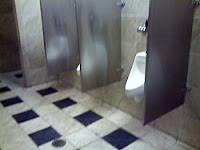 These are large rooms, by the way, on par with what was seen in spots like Grand Central Station or the Paris Las Vegas. Once you walk in, the large vanity area (on par in size with the one seen at the Delta Crown Room in JFK's Terminal 2) will be on your left. This area has a multi-sink station vanity made of black marble and a large stretch mirror hanging behind it -- very reminiscent to the mirror area in a dressing room, if you think about it (like what's done at Bill's Elbow South, only on a grander and classier scale).

The sinks themselves are all automatic, as is the soap dispenser (which dishes out a lovely foam soap). Towels (plush but disposable) are dispensed via a countertop holder -- like what you would see in a classy restaurant like Texas de Brazil, among other places. The vanity counter has circles cut into it, in which you toss the towels through and into the trash cans below. 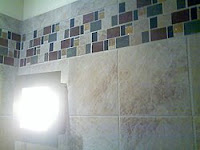 On the floor beneath the vanity is a set of plush zebra-striped rugs, which add to the glam factor. Over the vanity -- and around the rest of the bathroom -- is a highlight row of colorful tiles, which add a sense of class to the place and also proves reminiscent of the classy tile work found in places like Caesar's Palace and the Venetian, among others.

On the downside, the vanity was covered with spilled water -- the counter was literally drenched, which was somewhat offputting. Also, the floor was wet, as was the zebra rug (which I guess makes you understand why bathrooms rarely have rugs in them). Really, this was one of the wettest vanities I've seen since my trip to the Island of Adventure's Toon Lagoon. Not quite that horrific, but it was close in spots. 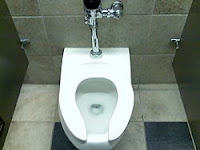 Of course, I understand that the casino was packed that day and that it's hard to police a bathroom effectively when there are tons of people floating in an out of it. The Port St. Lucie and Fort Drum service stations on the Florida Turnpike are further evidence of this -- just too much traffic to keep it consistently clean. Still, this is a hotel that aims to be high-end and those are service plazas, so you hope the managers notice the difference.

Anyway, to continue with the tour, the bathroom follows the design of Grand Central Station (and of the bathrooms experienced at the Philadelphia International Airport) some more in that it is a square room with the urinals set up along a center wall, which divides the bathroom into two parts (for the vanity and toilet stalls). Both sides of that wall have urinals on them. In the back section (and to the far left end) are rows of toilet stalls, maybe 10-15 in total. 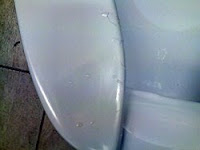 The urinals are your standard white porcelain variety and they are separated by stainless steel dividers. The stalls themselves have white toilets and stainless steel walls. The stalls are of standard width but the ones I stepped into had plenty of pee on the seats -- not terribly bad, like what was seen at the Oxford Railway Station, or the O2, but still bad enough to think that the place needed to have an attendant posted inside during the busier times.

The floors here are marble tile, beige with black highlight tiles. The walls are covered in a similar beige marble tile, but have that aforementioned ring of colorful highlight tiles. There isn't much on the walls, but the bright lighting and items like the zebra rug offer enough decor -- heck, there's a whole casino outside, so I have to respect the designers in their choice to make the place both glammy and a place to step away from the glitz (if only a little) of the casino outside. 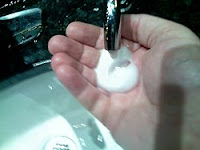 8. Almost a 7 because of the spilled water and pee, but still nice enough for you to be able to look past those fallacies and see what a quality restroom this really is.

It's a well-designed place. I think putting an attendant inside -- especially during peak traffic times -- would keep the place clean consistently, and also add a bit more class to the spot. Think about it.
at 14:46