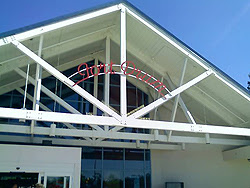 Like the Port St. Lucie/Ft. Pierce Service Plaza on the Florida Turnpike, the bathrooms here are found adjacent to the respective entrances: Men's room just inside the North entrance door, and the Women's just inside the South entrance.

An important note: Because the lobby separating the two ends can get very busy (ironically enough, just like the PSL plaza), getting to your loo of choice can be quite stressful, especially if you're in dire need to go. Expect to cut and jab, at times quite violently, to get through the masses of people lined up at the various fast food counters found here, which include Starbucks, Burger King, Nathan's, Miami Subs, Arthur Treacher's, and Freshens Frozen Treats.

A better bet (though it involves some planning in what is, essentially, an impulsive act) is to hit the place in the morning, as most of the tour buses don't arrive until afternoon (it's one of the last rest areas before reaching Orlando, so it can be pretty busy once the tourists arrive.) 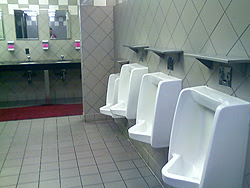 Like the PSL Service Plaza, the bathrooms here are shaped like a U, with the sinks along the base and two rooms of urinals and stalls making up the legs of the letter. The men's room can accommodate about 30 people at a time, give or take. The women's room, judging from what my companion told me, can hold about half that.

It's a Teutonic place, with dark tiles covering the floor and bland gray tiles on the wall. White sinks, white urinals and white toilets, with black stall doors separating them.

I visited this plaza twice, both out of necessity. The first visit was in early afternoon, during which the place was overrun by tour buses and tourists, and as a result it was a horrible experience through and through. There were so many people there that the bathroom felt like a subway station at rush hour -- people pushing and shoving just to stand their ground and not lose their place in line. Kids were running around everywhere, jumping into and splashing around in the various liquids found on the floor and throwing towels and trash about. 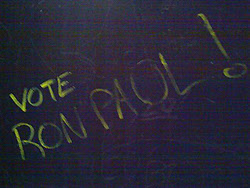 I managed to score on a stall on this visit instead of a urinal and found it horrifically dirty -- the floor was covered in urine, mis-thrown toilet paper and bits of feces (no kidding). And the stall doors had a considerable amount of graffiti on them, including a very prominent hand-written advertisement for Republican Presidential candidate Ron Paul. I didn't think the endorsement was very flattering, but I guess it does show where Paul's influence can be felt.

My second visit was better -- fewer people, quieter and cleaner. Though because it was mostly empty this time, I was able to better see the wear and tear of the tiles and floor, as well as the grime collected in the corners and other various shortcomings. The sink faucet, for example, is so close to the back of the sink that it's impossible to wash your hands without getting water and soap all over the vanity counter. Also, there were only two automatic paper towel dispensers in the bathroom, one at each side of the sink area, making it necessary for people to walk a good distance, while dribbling water on the floor from their wet hands, before being able to dry themselves. (Could this be part of the reason why the floors are always so wet here? Perhaps.) Also, the only trash cans were placed by entrance -- which may explain why there's so much trash on the floor (who wants to carry trash that fan, you know?) 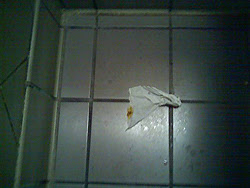 Also, during both visits, I saw an attendant standing idly by at the entrance, not doing anything much at all. (Another trend it shares with the PSL Plaza, I guess.) My companion did mention that two women were feverishly mopping the women's room while she was in there -- though she didn't mention what they were mopping up or why. I think I prefer not to know.

3. Hard to escape the memory of the feces I spotted on the floor during that first visit, even if my second visit was much improved over the first.

Clearly, the powers that be need to vastly re-think their cleaning strategy here. Simply put, this is not a pleasant place to stop.
at 15:24