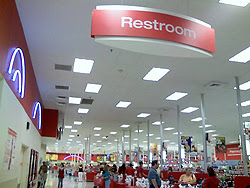 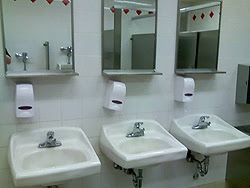 This is a SuperTarget, as opposed to a regular target, which means the store includes a full grocery in addition to the standard Target offerings. Because each half has its own entrance from the parking lot (though the who halves are connected inside), finding the bathrooms can be slightly tricky.

The safest bet is to enter the store from any entrance and then stroll along wall directly behind the cashiers, which has a number of third-party stores like a hair salon, cafe and such built into it. You'll see a sign for the Restrooms overhead about halfway down the wall. 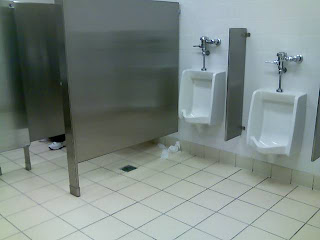 As with most Target bathrooms, the ones found in the Viera location are your standard department store facilities. Teutonic and clean but with little sense of style or creativity. Standard assembly line stuff, if you will.

Visitors here will find a predictable two-stall, three-urinal, three-sink set up, with beige tiles on the floor (along with strategically placed drains for easy mass-rinsing) and blank white tiles on the walls. Metallic stall walls separate the commode stations. Three uniformed mirrors hang above each respective sink, along with soap dispensers (one to each station) below them. 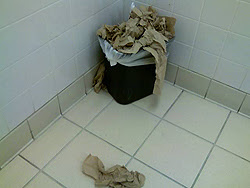 There isn't much to quibble about here. It's clean and boring. One of the sink dispensers was hanging crooked, but it wasn't enough of a design flaw to bicker about, I thought. Who cares, really? Also, the trashcan in the handicap stall was overfilled and some towels had made their way onto the floor, but I assumed it would be cleaned when the next shift started. Yawn.

Since Target positions itself as WalMart's more sophisticated and trendier cousin, you might expect to find some flashy additions to their bathrooms, like automatic sinks or toilet flushes (and that's just for starters). That's not the case here, which is a little surprising considering this is a relatively new store. Still, for outright functionality, it certainly can't be beat.

7. Bland and boring but useful and clean. Go figure.

Marks to the Management:

Some high-tech add-ons would be great, as would a touch of personality -- or even a wall hanging or two. Then again, I imagine trying to change the system in any way will involve loads of paperwork, and no one wants to bother with that, so I've got nothing.
at 14:23