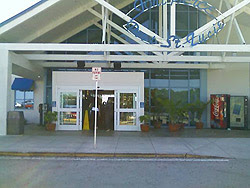 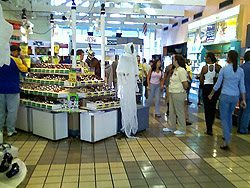 From the southbound entrance to the plaza (as opposed to the northbound, which is on the exact other side of the building), head through the sliding double doors and into a sea of impatient tourists standing in line for the various concessions found here, like Starbucks, Burger King, Cinnabon, Sbarro, and Freshens Frozen Treats. You'll find the women's room down a hallway to your immediate right (after entering).

The men's room is trickier to get to: You'll need to go through this chaotic cafeteria filled with people, cutting through whatever throngs you may find in front of you (and believe me, some of them won't budge, no matter how bad you have to go -- and there really isn't much room in lobby to go around them) until you reach the exact opposite side of the building. Once there, wrap around the last food counter and go into the right-back corner of the place. You'll find the men's room there. 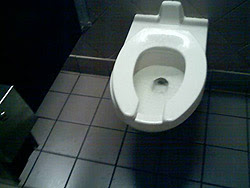 After such an incredible fight just to get to the men's room, I was hoping to find some sort of oasis waiting for me. Sadly, I sorely disappointed.

The men's room is U-shaped here, with a string of sinks making up the base of the U and two hallways of stalls and urinals making up the remaining legs of the letter. Like the plaza's lobby, it was crowded as hell on this visit -- men trying to get in and get out without making any attempt to be polite (I got checked into wall tile at one point), children weaving back and forth between people like they were tackling a slalom course. Just sheer madness.

If that weren't enough, the place was filthy -- though it certainly had the potential of being clean (perhaps at the start of the day it was?). The dark tiles on the floor were littered with towels, water, mud, shoe scuffs and more. The sinks and urinals, all automatic, looked like they were in need a good scrub; the urinals offered little privacy to those using them, and little buffer from the manic children running around behind them. The stalls were covered with water, urine and paper -- and I couldn't find a single toilet whose seat wasn't drenched in drops of urine. It was just disgusting. 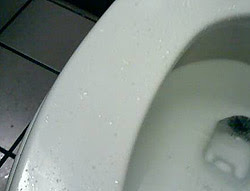 Worse still: An attendant stood at the entrance, mop and bucket in hand and a glum look on his face, and he did nothing. He just stood there, watching the frenzy before him. Perhaps he was waiting for the traffic to slow down? Perhaps he sensed the futility of cleaning a place that would just foul itself up again once he was done? Either way, he showed no initiative in doing his job. Really quite sad.

After leaving, I waited for my companion to meet me in the parking lot, so we could continue our trip, and the silence and stillness that met me in the lot was very welcoming. It was like I'd walked through a war zone and survived -- the service plaza was that inhospitable. My companion, after arriving, offered similar complaints about the women's room -- stalls covered in paper, water, and urine, among other things, and worse still she had to wait 20 minutes to use those facilities because of the crowds, whereas I was able to get in and out in a matter of minutes. Sometimes, I guess, it pays to be a male.

4. This was horrible experience, made all the more disappointing because the place houses the possibility of being a solid pit stop.

Yes, I realize the building gets a lot of traffic, but there has to be a way to get those restrooms cleaned more efficiently and regularly. Maybe you should post two attendants at a time and make sure they tidy up continuously. Most people won't make as much of a mess if they see an attendant nearby, tidying up. Then again, I could be wrong about this as well.
at 15:37

Strange subject, but i like it. Nice photos too.