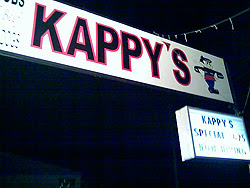 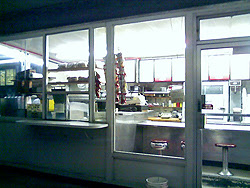 The bathrooms are around the back corner (south end) of the building. Having said that, the trip needed to get there isn't as easy as you might think. It requires courage -- and perhaps some manner of keeping those mind-over-bodily-function urges under control.

Walk along a rather dilapidated concrete walk path, around the structure, during which you'll see the environment around you growing increasingly darker and less civilized. Once there, you'll see a pair of red doors, each one looking like something you'd find in a haunted house movie. As in those movies, your better judgment tells you not to enter, but -- as is not always the case in this line of work -- your body tells you differently. In this case, listen to your better judgment. 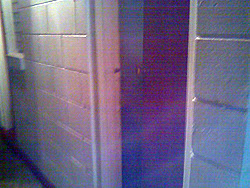 This diner/sandwich stand in Maitland (about 15 minutes north of Orlando's city center) may be one of the most modest eateries in Central Florida. The interior consists mostly of a grill and food storage area, with just a small counter and a handful of stools set aside for customers. Outside, in the parking lot houses about five or so worn down picnic tables, which tackle the seating surplus when the inside gets full (which is often, believe it or not).

Menu-wise, the options are limited. Steak sandwiches, hamburgers, fries, etc. They're all greasy, and bad for you, but the food is also surprisingly tasty -- some of the best sandwich stand food in the area, if you ask me. Probably only the Fillin' Station rivals its greasy goodness. It's unpretentious, somewhat old-fashion, and very affordable -- and the fact that it tastes great (and isn't less filling) makes it all the more impressive. 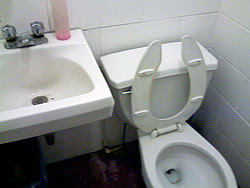 I wish I could say the same about the bathrooms. The men's room was this little tiny closet, set behind an ominous red door. Lighting is poor outside, worsening my impressions. I should say that my visit was in the evening of a cooler fall day. I recommend that if you do visit, and feel you might have to use the facilities, go during the day and during the cooler months of the year. At least that way you'll see fewer bugs and, of the bugs that are there, you can see what might jump out at you. I have the feeling that in the summer the place is overrun with cockroaches and other nasty creatures.

Inside, you'll find little more than a worn down toilet, a sink and a towel dispenser hanging over the sink. It's so small, there's barely any room for yourself. Grime and wear and tear can be seen everywhere, especially on the faucet (where I chose not to touch -- thank heavens for the bottle of Purell in my car.) The walls are nothing more than white-painted concrete block. The floors are dark-painted slab. Clearly not a lot of thought was put into the decor of this joint. 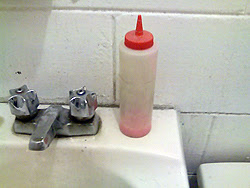 Some interesting highlights: The lighting here was somewhat bright when I first stepped inside, but the longer I stayed, the dimmer it became, and for a moment I wondered -- if I had to make a longer pit stop -- would I eventually end up in the dark and left at the mercies of whatever lurked in that little hole once the light was gone? (This is the stuff of nightmares, really.)

Also, the soap comes in an old ketchup squeeze bottle -- something I've never seen before. Granted, the ketchup bottle looked a bit on the worn down end, so I didn't test out its flow capacity, if you will. Still, you know the thing gets used because the state demands all restaurant employees to wash their hands after using the bathroom. All I can say to that is: Poor, poor employees.

The food is wonderful, but the place is nearing 40 years in age and it looks like it still has most of its original fixtures and decor. Perhaps time for a spruce up, no? Not only will the customers appreciate it, but so would your employees.
at 15:03