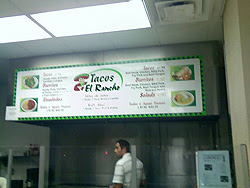 The place has two entrances, so the best starting point would be to go from the ordering counter. When facing the order counter, turn right and head to the eastern wall of the establishment. Look for a small hallway there. Enter it and you'll find the bathrooms. 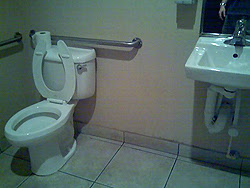 This humble taqueria on the south end of Orlando's Conway neighborhood, serves decent Mexican street food, though I wouldn't say it's the best in town. If you're in the mood for a quick taco or burrito at a fair price, and you're in the neighborhood, then this would make for a good stop. The carnitas and al pastor tacos are my favorites.

The inside looks much like a fast food restaurant, with a stainless steel ordering counter, a huge menu board overhead, a grill in the back and heating trays of food and toppings. Service is friendly and fast. 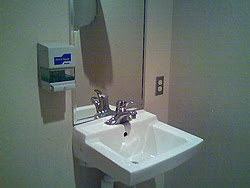 Given that this is a Mexican joint, you would expect the joint to have a filthy bathrooms (like the now infamous Ay Jalisco). But that isn't the case here. The toilets, though your standard strip mall variety, are surprisingly clean and enjoyable. One toilet, one sink, in a roomy closet that is spotless and smell-less -- which is no easy feat, considering the food served here. (Has anyone ever really smelled tacos al pastor? You would think the food would create smells that would reverberate for hours in the bathroom!)

Granted, the decor here is a little bare bones: No wall hangings, no nothing. Just drywall walls and standard off-white tiles on the floor, nothing else. It's a bit dim, lighting-wise, as well, but not as dark as other places I've visited (and certainly not in the same realm as Shari Sushi, which essentially asks you to do your business in the dark). Still, as said before, it's well-kept and private and for such an establishment, you couldn't ask for more.

The highlight of course is the automatic air freshener, which is placed above 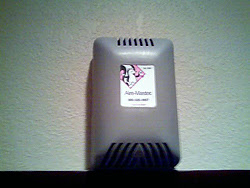 the door here instead of in clear view of the visitor. Most places, like Country Ham and Eggs in Sebastian, keep their air fresheners out for everyone to see, which has always made me slightly uncomfortable. I don't mind doing my business in these places, but I don't really want to see any part of the cleaning process restaurants and businesses take to eliminate the remnants of my business after the fact. By placing it above the door, Tacos El Rancho has managed to separate the visitor from the cleaning process in ways I never thought possible. Who knew such a simple design change could have such ramifications?

8. Would be a 7, but I raised the score because of that ingeniously hidden air freshener.