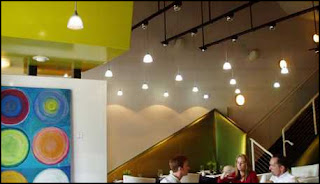 Walk down the middle of the restaurant, past the metallic, sheen sushi bar and towards the entrance to the equally metallic and somewhat less sheen storage area and kitchen (you'll see lots of fridges and appliances). But instead of going into the kitchen, turn left -- the bathrooms are there, one-seaters, one for men and one for women.

This is one hipper-than-hip place -- a see-and-be-seen scene in trendy Thornton Park. Food is creative and expensive, and though there better sushi in Orlando (at a better price) the clientele seems to comes here mostly for the scene.

That being said -- this may be one of the hipper bathrooms I've been to in Orlando. So hip, in fact, that I felt a little out of place going in at first. (Thankfully, the laws of nature came to my rescue and got me past the metaphorical velvet rope.) Inside, you'll find marble tile on the walls; lots of black porcelain add-ons (like a square sink that seems lifted out of the counter); and a nifty faucet that uses a lever instead of knobs to turn the water on. Toilets (both urinal and commode in the men's room) are your standard white editions you find everywhere else, but they look like works of art when juxtaposed against the black floor tiles and marble walls.

Only drawback -- the lighting is very soft, and with all that black inside, it makes the room a little bit dark. Or "very dark, I could barely see in there"-- as one of my dining companions put it.

A little more light might help. But then it might hurt the hipness factor some -- which is certainly the restaurant's top priority.
at 14:25