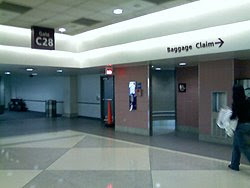 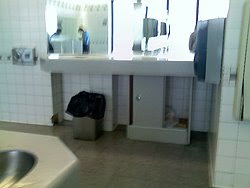 Gate C28 is at the end of the C terminal in PHL. Given that, and that these toilets accommodate only about three to four gates worth of people at most, you'd expect the bathrooms here to be a little small.

That isn't the case. These are somewhat sprawling facilities offering passing travelers plenty of chances to stretch out after suffering through the tight quarters of an airplane. I'm sure they get busy now and then, but on my visit I found them practically empty and very welcoming. 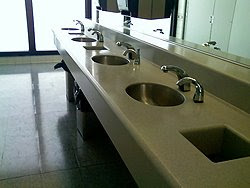 The bathroom here comes split into two distinct sections, one for toilet stalls and one for urinals; each area features a somewhat vast "lobby" area between the actual toilet and the sink stations, which occupy the center island here and serve as the divider between the two areas.

The toilet stalls, maybe 10 in all, line the entire back wall of the place and are roomy enough to get your business done in, but the commodes themselves sit a little too lowly to the ground for my taste -- makes it hard to get up after a long sit, if you will. Also, although they sit far from the main entrance to the bathroom, there is still little feeling of isolation felt inside, due mostly to the "lobby" area in front of them, which carries the sounds made by the people at the sink stations a little too well. 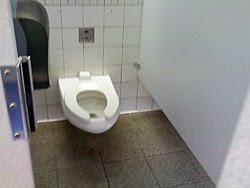 The urinals, maybe seven total, sit in the back right corner of the place and are lined up on the same wall as the entrance door and a baby-changing station. No, no one can peak in while you're piddling, but still the sensation of someone possibly having the chance to do so is certainly there. Adding a door to the entrance would easily solve these paranoid delusions.

Otherwise, it's a very clean place, easily on par with the other airports we've visited recently. The sinks are all metallic and shiny and configured with automatic faucets and soap dispensers. Toilets, with automatic flush, were all in tip-top shape and sparkling clean.

7. I like the spaciousness but would prefer the place not carry sound so efficiently because of it.

A door, instead of an open entrance, would be nice. I would also suggest adding a way to absorb that extra sound there, but I'm not sure what can be done without resurfacing the walls, which would be very expensive and burdensome, so....
at 14:13