Teeter's Toilets a Step Up From Other Gourmet Market Facilities, But Still Far From Perfect 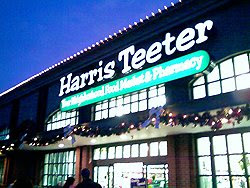 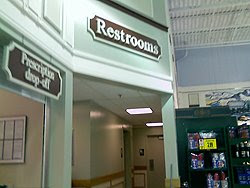 From the front entrance, head left once you're in the store and head for the pharmacy. Once you get there, look up and you'll find the sign for the restrooms. 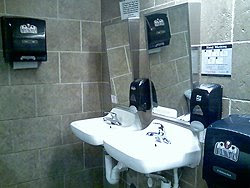 Though billed as "Your Neighborhood Food Market," this southeast U.S. chain boasts a bevy of higher-end foods, including an impressive fish and meat counter and choice selection of fresh wild mushrooms -- and that's in addition to the essentials.

Think of it as a Fresh Market crossed with a Winn Dixie, if you will, though in my opinion it's a nicer place to shop than either of those, and I found the staff here to be very down-to-earth and friendly, not elitist or prudish, like at some staff at other higher-end food markets. 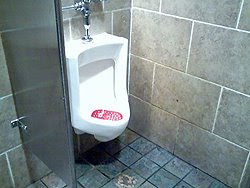 Thanks to the hard-to-miss sign for the toilets, which kind of sets your expectations, you go in thinking the bathrooms here will be pretty snazzy. And in a way they are. The walls are covered with faux-brick tile, the floors with a different pattern (and smaller tile) as that found on the walls. The toilets and urinals are separated by shimmering stainless steel dividers, which add a cool sense of modernism to the environment. Because of that, the standard white porcelain fixtures tend to stick out a little more and seem less ordinary.

Also impressive is the mirror, which angles out towards the sink station some -- a simple adjustment that inflects some style into what is an ordinary toilet, really. 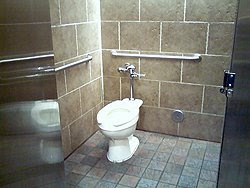 Given that, you'd think these toilets to have met the high expectations other gourmet markets or specialty stores have missed, like the aforementioned Fresh Market or Total Wine. And in a certain regards, that is so.

But the bathrooms here were also untidy and somewhat foul-smelling from repeated use during the day -- and it's very obvious that a cleanup crew doesn't come in regularly enough, like every few hours, to keep the place in tip-top shape. 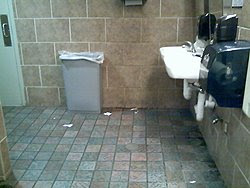 I found plenty of paper bits on the floor (mis-thrown towels and generic tear-offs that clung too hard to the dispenser after the towel segment had been issued). I also spotted much water and other spilled liquids (i.e. urine) around the base of the toilets and urinals.

Sure, there were some clean spots, but the messy areas were very noticeable -- as was the smell (most likely produced by that spilled pee). Having a crew come in more than once or twice a day will solve this problem, by the way.

6. Looks nice on the surface, and definitely has potential, but it's also more dirty than it looks. It has potential for being rated higher, though.

I imagine you send in a crew here once a day to tidy the place up. Obviously, it gets more traffic than you think it does, so consider sending in a crew or attendant every few hours, or at least three to four times a day, just to keep the place spiffed up. It surely needs it -- and doing so will certainly make the experience better for all.
at 14:46