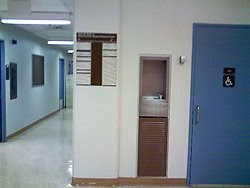 The toilets are on the fourth floor of the building where the Neuromuscular Disease Center is. Follow the signs to the building and then head up via the elevator. The men's bathroom is right next to the elevator, beside the sign for the center (as shown above). The women's is to the right of the elevator shaft. 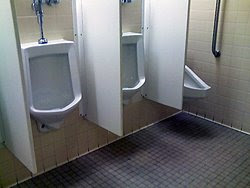 These are classic multi-person facilities in a public building. The design is pretty much standard for what you'll find inside any institution of higher learning. It's fully functional and clean but also a little sterile and run-of-the-mill. Then again, considering that it's at a medical research facility, you kind of expect that. This isn't Vegas, after all. 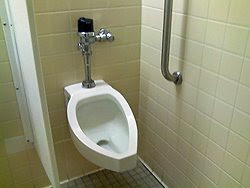 The walls are covered with beige tile and white grout -- both a bit worn but not so much to make them look like they're in need of replacement. The floor is covered with small dark brown tile and black grout -- a standard combination for public restrooms that we've seen used in many other places (it hides dirt and stains better), like Fresh Market Orlando or Total Wine Raleigh. Only here, they tile is a bit darker, better kept and cleaner. 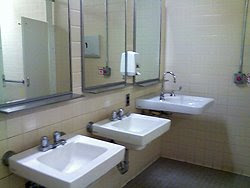 (Apparently, the rule seems to be that if you're a store selling household items or foods, people will expect your bathrooms' floors to be clean and sparkling but in reality they will be brown and dingy and gross. On the flip side, if you're a location that services students -- who are supposed to be somewhat unkempt to begin with and generally speaking have better things to worry about than cleanliness -- you floors will be spotless and sanitary. Go figure.)

Feature-wise, the place offers everything in sets of threes: Three urinals, three stalls, and three sink-mirror stations. The catch here is that the third in each group is designed specifically for disabled persons. 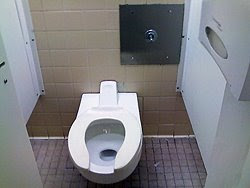 The third urinal in its series, for example, pointed out from behind the beige divider separating it from its neighbor, allowing those with access issues a better chance at hitting the mark, so to speak. A similar concept was found in the sink, where the third sink of the series jetted out from the wall further than the rest. (Though, it should be said that the faucets were still along the back side -- something I see with handicapped toilets all over, and it makes me wonder if anyone in, say, a wheelchair ever has trouble reaching back to turn on the water. One would think it would be easier to to place the faucets in a location that makes them easier to grab? Just a thought.) 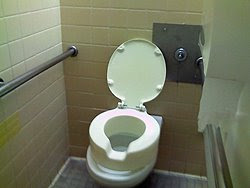 The commodes themselves broke away from the pattern described above in that the third stall was indeed roomier and granted greater access to handicapped persons, but in addition to this (which is usually as far as toilets like these go) it also offered a plastic booster seat placed atop the commode itself. The booster looked like it would make it easier for someone to sit and get up from the toilets themselves. Granted, the plastic booster also looked like it might not be too sanitary after a use or two -- I imagined, even after one use, it would look much like one of those portable compost toilets hikers take around with them (ick) so they can crap in the woods -- but on a per use basis it sure looked helpful. 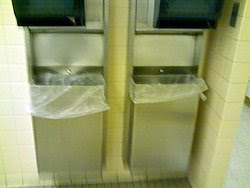 Otherwise, this is a clean, relatively quiet bathroom that -- outside of its disabled features -- doesn't have anything very distinctive about it -- expect maybe the side-by-side paper towel dispensers, which looked rather futuristic, I thought.

Hmm... maybe this place is cooler than I first thought it was.

8. Big ups for its disabled features, which are plentiful, well-planned and clean.

A little decor might help. But then, outside of the people who work here and attend classes here, who would really visit the place? It's a lab bathroom -- so perhaps it doesn't really need much in terms of decor.
at 14:40