Maurice's BBQ is Heavenly, But its Toilets Lack Southern Charm 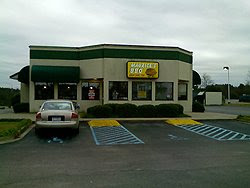 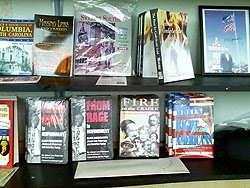 From the front entrance, walk past the small front-of -building store containing a slew of pro-South memorabilia and books and head to the order counter. Once there, resist the temptation of ordering a platter of BBQ, turn right and enter the dining room.

Turn left down the front lobe of the dining room and head towards the giant portrait of Maurice, the place's owner, sitting on the back wall. There is a small doorway to the right of that, which leads into an enclave holding the bathrooms. 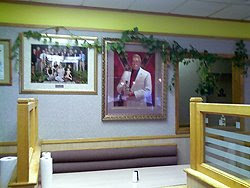 Maurice's Piggy Park has been placed on such a pedestal in my home that when we passed a franchise store for the South Carolina-only BBQ chain off the highway we didn't even question the idea of not stopping. Ironically, to this point, I'd had only this company's sauce and knew a little about it's owner, Maurice, who is one of those Southerners who feels the south should rise again and takes a lot of pride in his native state's pre-Civil War heritage. The sauce of course is fantastic so I'll easily forgive the company's namesake for his cultural and political views. However, I had not sampled his BBQ to this point. 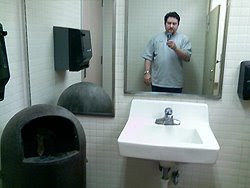 Walking up to the place, which looks like a converted Taco Bell from the outside, I smelled little smoke or anything resembling the top-notched BBQ I've had so far in my life. I suddenly started wondering if I was in for another roadside restaurant letdown.

Ordering did little to assuage my insecurities. The food, I saw, came not from smokers or ovens, but from steam boxes in the kitchen that kept the various menu items warm. In asking the cashier about this, I was told that this location received several shipments of fresh BBQ from its headquarters in Columbia (about an hour and a half away) each day and didn't do much cooking outside of griddle and frying work for the hot dogs, burgers and fries. Not exactly a promising start. 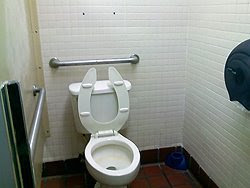 We ordered the sample plate, which included generous portions of BBQ chicken, pulled pork, BBQ hash over rice, brisket, sliced pork and more, and then sat down to wait for our food. We grabbed four bottles of sauce on the way to the table too -- Maurice's original, spicy, hickory and honey.

Now, a word on Maurice's sauces: These are mustard based sauces, so if you're a fan of vinegar or tomato based sauce you might not go for these. They take a bit of getting used to, especially if you're expecting something more traditional. But they are outstanding and once you open your mind to them you'll see what the fuss is all about. Ironically, Maurice's calls them "table sauces," meaning they can be used for multiple items, not just BBQ. And this is true -- it's great on everything, even cereal. 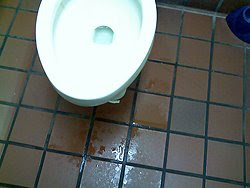 Of course, the BBQ came out and we were astonished by the amount of food being given to us. It could easily feed a family of 6 and you still might have leftovers. This is unique BBQ -- where as most BBQ I've had is dry smoked and tends to require sauce for moistening, this BBQ came to us as a delightful, juicy, gooey mess. The smoke flavor abounded but wasn't overpowering or too subtle. Topping it with the sauce increased the gooey texture and added another dimension of flavor and texture to the food. I couldn't help but get my hands in there and start nibbling, gnawing and chewing. This was hands down the best BBQ I've ever had. It was life changing, it was that good. Kudos to you, Maurice. 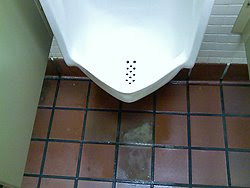 Now, if only I could say the same about your restaurant's bathroom. This was a sad state of affairs, to say the least. Of course, with all that gooey BBQ being served in the dining room, you expect the place to be a bit dingy. Hell, this isn't a fine dining place and people will have to wash their hands well after leaving (you hear that Uncle Bubba's?). But I wasn't expecting the place to be this off the mark.

The walls here are covered with tiny white tiles, and much of the grout seems to have seen better days and has noticeable bits of grime and mildew in it. The floor is covered with that bland dark brick tile we see at lots of places, which is used so messes don't look so apparent on the floor. Well, I have to say that tile or not tile there was a lot of mess on the floor, namely in the form of urine. Nearly every toilet, from urinal to commode, had a small pool of it at its base. As you can imagine, the smell was pretty strong -- and it kind of killed the vibe created by that great BBQ, which is very sad indeed. 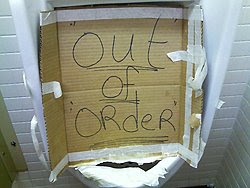 Also worth noting is that one of the urinals was out of order, and I wonder if this made patrons think they could use the floor as an alternative. It certainly seemed that way from what I saw. (And the large sign posted over the broken urinal, indicating it wasn't working, was so large and attention-getting that I wondered if the public hadn't seen the first few signs posted there and continued doing there business in the urinal regardless of the warning.)

The sink itself was clean enough, but the faucets spit out water at a lower pressure than what was needed to get those BBQ-sauce entrenched hands spotless. You really needed to work to get your hands clean here. The toilet stall (only one here; with two urinals and one sink) wasn't in too bad of condition, except the toilet itself had some harsh hard water stains inside, as well as a good pool of urine around its base.

Needless to say, I couldn't wait to get back into the dining room after visiting.

Clearly, the broken urinal needs to be fixed. But also, I think someone needs to visit the toilets more than once or twice a day, if nothing else but to mop up all that urine on the floor. Pretty gross, especially considering this is the last impression you're likely making on your guests (since they'll need to go here to wash their hands after their meal and before leaving). I'd hate for the reputation of your amazing, heavenly BBQ to be destroyed by the poor condition of your toilets, because BBQ like that deserves much better. It's so good, really, it deserves sainthood.
at 13:54