Toilets at Wake Forrest Chick-fil-A are Teutonic But Clean 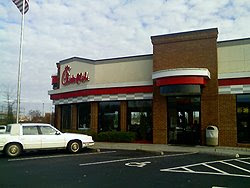 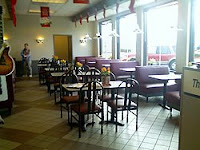 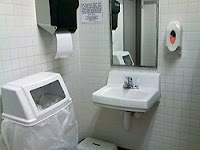 This is a relatively new Chick-fil-A in an up and coming area of Raleigh. As a result, everything here from the dining room to the parking lot looks -- for the most part -- barely used.

The dining room comes filled with booths and cafe tables, and nearly all the seats here are covered in a maroon vinyl that, I'm assuming, is spill-proof. The floors are covered with thick, easy-to-mop tile that's been laid out in a semi-decorative pattern, so that people won't realize right away it's easy to mop. The walls are bare for the most part and the lighting -- much of it coming from the ceiling-high windows lining the perimeter of the dining room -- is inviting, to say the least. 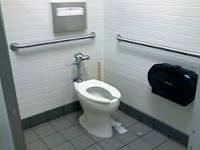 For those who've yet to visit a Chick-fil-A: It's a fast food joint that specializes in fried chicken breast sandwiches. They are decent sandwiches for the price, consisting primarily of whole white meat chicken instead of processed chunks that have been pressed into cutlet shapes, and they best the quality of most chicken sandwiches at more popular chains like McDonald's, Burger King or Wendy's. Great for a quick comforting sandwich meal when you're on the go, though certainly nothing to plan a trip around.

The bathrooms, like they are are most American fast food joints (including Jack in the Box and McDonald's, to name a few), are Teutonic but clean. Don't expect much personality here, just the basics; and considering the place is still relatively new, it's yet to have the traditional fast-food-restaurant bathroom wear and tear grime starting to settle in. (Clearly, fast food chain designers have yet to visit our favorite fast food restaurant bathroom, Tacos El Rancho. We hope they do soon, though, so they get an idea of how to lift a bathroom a cut above the standard design.) 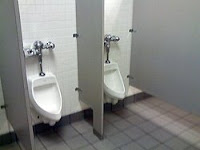 Visitors here can expect to find a modestly sized facility. Two urinals, one roomy bathroom stall, one standard white sink, bland grey dividers and stall doors, white tile on the walls, black and gray tile on the floor (again, easy to mop, and it covers mildew stains better than while tile) and no wall decorations. 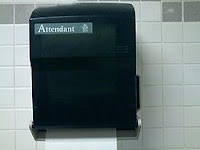 As mentioned earlier, it's not exactly a place brimming with personality (the only quirk I found was that the automatic paper towel dispenser was placed too closely to the sink, so that each time there was any movement from that area a towel was dispensed), but it's clean and odor free (the only flaw in this was that I found a stranded piece of toilet paper by the commode -- nothing to get excited over, though) and seems well-kept and regularly policed. Like with the food, it's a great place to stop if you're in the neighborhood and can't make it home before the inevitable accident, but it's certainly not worth planning a trip to experience.

7. In the same league as Jack in the Box, really.

:) this idea still amazes me, but from the other side - toilets are essential, actually...