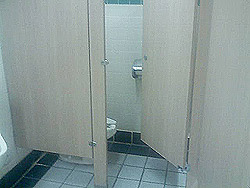 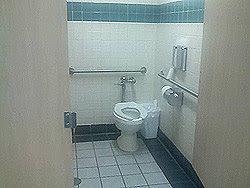 When facing the order counter, look to your left and you'll see a corridor stretching behind the kitchen and into the back of the place. Head down that hall and you'll find the bathrooms there.

This fast-food chain, popular in the West, offers decent fast food fare like burgers, fries and the lot, with the menu focusing of late on sandwiches put on ciabata bread (apparently it's America's new bread of choice, because it's chewy instead of soft and tasteless, like Wonder Bread). It's not a high-end dining place at all, but it's cheap and decent enough to satiate the hunger pangs while you're on a multi-hour drive to Vegas, like I was at the time of my stop. 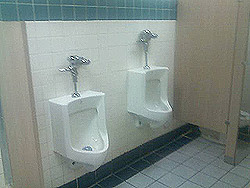 This location, in a new strip mall set in the boom town of Mesquite (which just five years ago -- on my last pass through -- consisted of nothing more than two casinos and now consists of a vast array of home developments, shopping malls, golf courses and other entertainment venues) is a bit tricky to get to, because of the way the road winds around the city (feels like a roundabout, and thus you drive through it as thus, but it really is just a windy road). Once inside, you'll find a clean restaurant filled with sparkling tiles, linoleum tables and booths and a stainless steel order counter with light-up menu overhead.

The bathrooms offer more of the same generic-ness: White tiles on the walls, with lime green tile accent lines; white fixtures; off-white/beige stall dividers;, grey floor tiles with black borders. Nothing too creative, mind you, but clean and serviceable enough -- especially in terms of fast food restaurant bathrooms, which at times can be pretty awful. One odd thing of note: The place was missing a mirror over the sink. What's that all about? 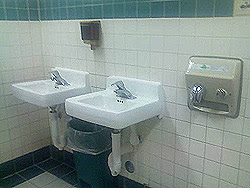 If found some little wear and tear on the fixtures, but that's to be expected. Everything was in working order and nothing was installed crookedly or leaking. (It's still a relatively new establishment, I gather, so how bad can it be?). Unfortunately, the noise factor is a little heavy, especially in the way the restaurant's entrance door sensor rings (it chimes every time the door opens or closes) and carries down that hallway leading to the toilets. It was so distracting and invading and continuous that for a while I thought the place was being flooded with customers and that my private time in the bathroom would soon come to an end. Later though, when I exited and went to the counter to order some food, I found out the door wasn't quite shut all the way and the desert wind was actually responsible for blowing it open repeatedly. The place was empty, outside of myself and the employees.

7. Almost an eight, were it not for the missing mirrors and that incessant door chiming.

Install some mirrors and fix that door!
at 15:42