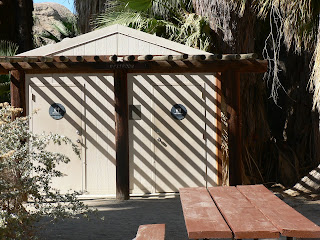 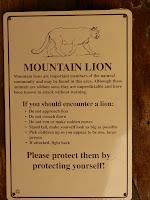 From the parking area (car park would be an over statement as it is really a bit of desert with a few rocks around it) head into the reserve. Keep your wits about you though as there are wild animals out to get you. No kidding, a cougar was seen near the cars that very morning! Continue keeping the visitor centre to the right. Head off across the picnic area and you’ll come across the out house.

What I knew about Palm Springs CA before I got there was limited to a couple of stereotypes. All I really knew was that its likely to be warmer than Aspen and was full of old people and, as with anywhere where old people go for winter, was likely to have little to offer. I guess on the first point I was proved right. Leaving Aspen on a cold crisp sunny morning at 21F and arriving at 4pm in the springs to find it hot, dry and 95F certainly did that! But did the place have little to offer? 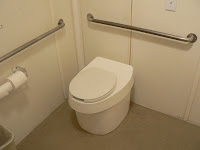 On the basis of my ill founded stereotypes I’d given myself a little less than 20 hours for this stop, but after squeezing my meetings into the evening and first thing I found myself with a couple of hours to test out my theory. Well, lets just say other than a half decent Thai meal on the main street (the waitress gave me fantastic service after I asked for chop sticks - obviously ignoring the other customers who’s fingers couldn’t cope with the idea) the best thing to do involved the best outhouse we’ve yet featured.

'Better than Red Rock?' I hear you say – well lets say the instructions, safety features, and welcome relief have to make this place the best out house I've been in for many years! So what gives? 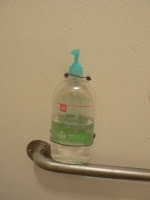 Well, if you’ve seen Eyal’s review of Red Rock Canyon you’ll already have the idea, and given I was in suit and trousers, you’ll also understand that I looked a little out of place. Dusty, hot, but with spectacular scenery that made the effort of polish my shoes later that night well worth it.

Once there, you have to say the out house is cute from outside. White paint and a pagoda make it look like its on Martha’s Vineyard rather than in the scorching desert. The first thing you notice inside is that it’s pretty damned clean for a toilet in the middle of the desert. Then it starts to hit you that, yeah, you really are in the desert and there isn’t any running water for this pit stop. But this is where this operation is so good. It’s not busy and is ultimately private (half of the hut all to yourself) so you can afford to take your time.

Then there are the signs.

There’s the ones on operation. If you were wondering how it all works its all there for you on the signs. You are using a recycling (composting to be exact) toilet by Clivus. And could it be any simpler? No this is the ultimate in toilets. No flush, no taps, no towels and the sanitizing soap smelled good too. Cool. 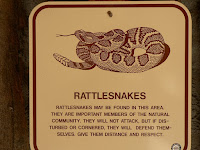 Then there are the signs for entertainment. I knew at least three species of bat by the time I left.

AND THEN there are the safety signs. You soon decide to watch out that there are no stray mountain lions in the cabin before you enter. And was I just paranoid when checking under the toilet seat for rattlesnakes?

Overall, for an outhouse (did I say that already Eyal?) this place was pretty damned good! Take a trip and see. Honest you won't regret it. 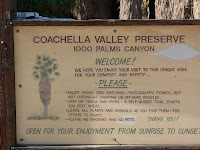 Fantastic facilities in the middle of nowhere.
at 21:35