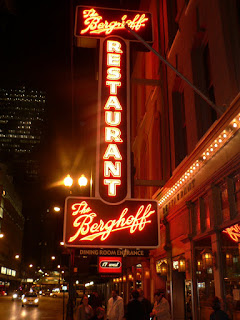 From the entrance you’ll turn directly right into a waiting area. To go to the dining room and host you’ll head left. Don’t. Instead head right down the stairs to the basement. At the base of the stairs you turn back on yourself. Keep on going ahead and then right. The toilets are at the end. 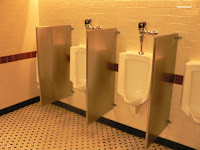 Opened in 1898 Berghoffs is a Chicago institution. Go look at the second website and you can get a full history. Famed for its German fare it closed early in 2006 when the third generation of Berghoffs decided to retire. Nevertheless, nothing seems to have changed to the place since 2001 when I last visited. The main dining hall still has the cavernous feel of any beer hall in Munchen, and has plenty of space for the big groups of people that pack in. 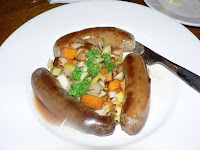 Even better the place still offers good beer, sauerkraut and the other German food you’d expect. My choice was a medley of sausages. Authentic and just what I needed to balance out the steak people kept on wanting me to eat. (What is it with Americans and steak? Do they think we don’t have any in Europe. No, the the 2007 european steak draught has not happened.)

So, unlike Marshall fields that turned in to a Macys, this place hasn’t lost its charm or authenticity. The service is pretty damned good too. 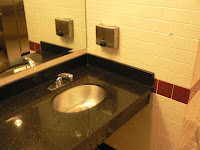 So let’s get on to the toilets. Well lets just say that the first thing you notice is that it is a trek from the main dining room down to get there. If you had a gammy leg the next course could arrive and be cold before you got back. OK so maybe we don’t care too much about people with gammy legs.

What you get when you arrive in these toilets is spick and span, clean by all means but they lack that special touch you might get elsewhere. What you get fits well with the place whilst still being modern, plenty of capacity, but they could be a combination of many other toilets. The floor happens to be the same as the floor in the shower of my current hotel room (which has is a special set up by any measure), the red tile divide with the cream 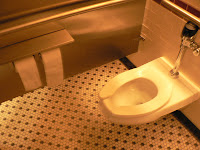 tile is suspiciously like that you see in Aspen airport (see last entry). There’s nothing wrong here but nothing to set it apart!

So, what can I say. Come to the Berghoff to experience an almost original Chicago institution and some fairly hearty food. Don’t make a trip just for the toilet.

7. nothing objectionable but needs that extra touch.

You have a famous destination. Make it even better by making the toilets part of the attraction.