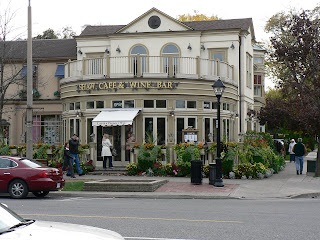 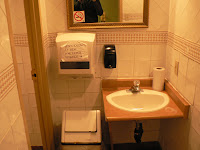 OK from the front entrance head straight to the bar area and then left to follow the bar around. You’ll find a stairwell that spirals down toward the toilets. They are right of where you come off the stairs.

Over a year before this trip I’d passed by the Shaw Café one evening when it was closed and thought it looked like a good place to stop and have a light bite to eat. The building looks inviting and has tables by the windows so you can look out at the passers by. There is also a restaurant on the upper floor. In fact you’d have to say the stairwell is the most impressive thing about the place. 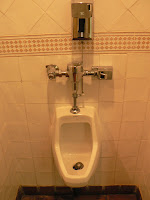 On the October night a year before I’d not noticed its name or the statue outside. My father had a picture of (George) Bernard Shaw hanging in our house all the time I was a kid so it was instantaneously recognisable. But what would GBS think about being made a tourist attraction? Was this restaurant, which after all only recently replaced a gas station, really in good taste?

Let’s remember that he was an accomplished Nobel Prize winning playwright, and founding member of the Fabians (a socialist reforming movement in which the current ruling Labour party has its roots). His later life certainly reflected his socialist tendencies as he tended his gardens in his fairly basic Hertfordshire home.

Well, as the man himself says there is no love sincerer than the love of food, which is a pity as the Shaw café didn’t excel on this front to be sure. What looked like good cheesecake turned out to be dry, stale mush with some half rotten fruit on top. Yuk, yuk, yuk! 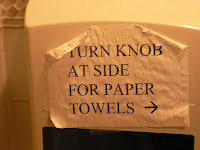 It’s also true that the power of accurate observation is commonly called cynicism by those who have not got it. And this seems to be true of those who review this place on other web sites. Oh lovely they say. Obviously not seen the toilets I groan.

Well actually they weren’t that horrendously bad. I guess the fixtures were clean at least. But then the place seemed generally down at heal and on the slide to oblivion. These toilets are clearly under the staircase. Not a bad thing in itself, but the area by the entrance is cluttered and has that spare room feel! Not inviting at all. Then you enter to find the dreaded paper sign with decaying tape and folded edges. Turn the knob for paper towels. Are you really saying your clientele hasn’t used towel dispensers before? 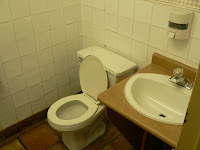 Then there is the crucial design floor. Well it is actually the floor, or the tiles to be exact. The quarry tiles look dirty and are of the sort that, whether dirty or not, they will always look dirty. Add to this the cheap sink surrounds – are they really plastic! – and the out of kilter tiles on the walls and what you have is a place that generally feels grubby.

Silence is the most perfect expression of scorn.