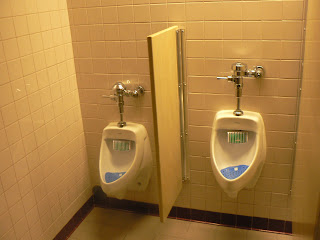 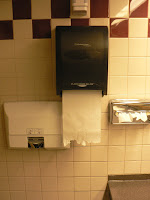 From the main entrance, head right towards the restaurant and gates. The toilets are right there on your left before you head through the ‘corridor’ to the restaurant. Males go to the right and females to the left.

This has to be the smallest and cosiest airport I’ve ever flown into. As one of the locals said to me, when there’s only two gates you know you’re coming in to a small town. Whilst it might not have the shiny wide spaces of other terminals, it has an air of exclusivity that you’d expect with a resort of this calibre. 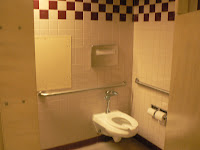 The fact that the planes give a fairly bumpy ride over the mountains from Denver means that you wouldn’t want to use the toilet on the plane even if the stern warning form the pilot not to get up wasn’t being enforced by the cabin crew. This means that although this is the off-season for Aspen there was a mad dash for the toilet when the flight landed. Given this they were in pretty good order. 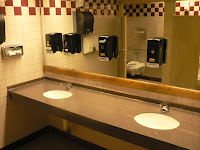 Lets just say they’re not the biggest set of airport toilets I’ve ever seen but they were functional, clean, and had the requisite electric paper towel dispenser. Actually, the scale of the toilets meant that you didn’t mind waiting a moment, as they were homey and warm. I guess if there is any criticism to be had it’s the corking on the sink counter top. Not really noticeable unless you really look closely, but a nice marble number would go down well.

So what is the other lesson you need to learn before you come to Aspen. Well I guess you know about the one about yellow snow?

8 for the homey feel.


Comments to the management:
Slightly more capacity wouldn’t go amiss , especially when you hit the peak season it must be a real squeeze.
at 19:52