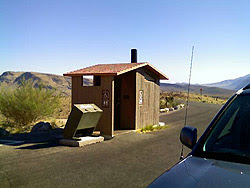 This national conservation area, located on the south end of Las Vegas (about 15 minutes from the Strip, via HW 215), offers visitors a chance to drive through the recreation area on a 15-mile car loop, with many marked stops along the way. The outhouse visited here is at the third stop on that loop. 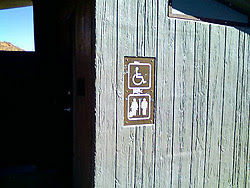 It's an outhouse, that's what it's like. Did you expect something else?

This is a single-toilet structure, set in the back of a parking lot that leads to walking trails into the rocks behind it. Outside, there are wonderful views of the multi-colored stone and scorched desert, as well as solid vistas of Vegas beyond it. Inside, it's a white room with a compost toilet and a toilet paper holder, nothing more. It's somewhat clean but also somewhat -- it's an outhouse, essentially.

The inside of the place could use another coat of paint, just so it won't look so run down. Also, it would be nice if they included some Purell or something of the like inside to sanitize your hands with after the fact. And it's very stuffy inside, since there's no real ventilation and it's sitting in the middle of a desert (my visit was in late September, and it was hot then, but I imagine it's brutal inside this place in the summer -- hot enough to cook in, at least). 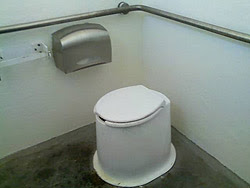 But then, as I said, it's an outhouse -- basic facilities for those in dire need, nothing more -- not a comfort castle in any means, so what can you expect? As an outhouse, it's above average. As a bathroom, it's surprisingly more clean than a number of restaurant and gas station toilets I've visited -- as well as a few homes. It smells a bit off, but it's an outhouse, so I guess it's supposed to. At least the view outside will make you forget any misgivings once you've finished your business, right?

Needs another coat of paint and a Purell dispenser. Otherwise, not bad. The second best of the three outhouses visited on this trip -- and loads better than the one I visited in Winter Park on that strange occasion.
at 13:42