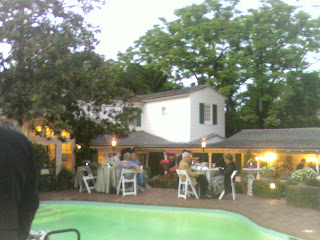 Fancy Lawyer's Multi-Millions Dollar Mansion
(wedding of his son, an actor, to a hair dresser)
Winter Park, FL USA
(the wealthy part, with a nice view of a lake, not the crummy part)

It's not in the house, that's for damn sure. For this wedding, NO ONE WAS ALLOWED IN THE HOUSE except staff. That meant that the guests had to use a set port-o-lets set up in the back yard if they had to relieve themselves. Naturally, the guest list here included some of Orlando's elite (including past mayors, politicians, famous lawyers and more) -- none were allowed to relieve themselves inside the host's multi-million-dollar, multi-room lakeside mansion.

BUT NO! Once we got there a very rude servant or wedding-staff member ran out the front door and told us "NO ONE IS ALLOWED IN THE HOUSE! THE HOUSE IS ONLY FOR AUTHORIZED PERSONNEL." Go figure.

Then, the servant grabbed our wedding gift from our hands (didn't even ask for it) and ordered us to go to the right, where we found a very narrow brick pathway through an overgrown garden of roses (ouch, thorns!) and sage brush that led us around the house (about a half-mile, I think) and into the back yard. The bricks on the path were rough and uneven, which made my companion's attempt to walk the path in heels all the more challenging.

Once there, we were greeted by an elegant garden filled with fountains, tables, tents (each one offering food and drink) and a larger covered area where the band and a dance floor were set. The port-o-lets were set behind the tent housing the dance floor and band. 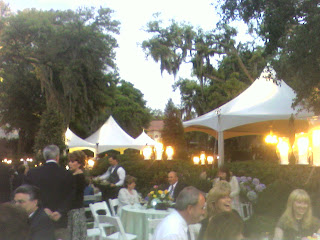 It's a fancy house, sure, and the garden decor for the reception itself was quite beautiful. Given that, you'd think the port-o-lets would be special, and they were. The units were made so that the person using them didn't have to involve his or her hands much for operation. Sinks (which streamed in water from attached tanks) could be operated with foot pedals. And there even was separate areas for urinals and toilets, to make things more hygenic for male and female sharing.

Despite this, however, the toilets offered little comfort. This mostly was due to a lack of lighting. The wedding reception started at 630pm, so after an hour or so, the sun started falling and it began to get dark, and while this drew out the many candles set decoratively around the garden and made for a very romantic setting, there was no lighting near any of the port-o-lets, and also because they were set under this mammoth canopy of willow and live oak, it got very dark by them very quickly, so much so that if you entered the toilet after, say, 8pm, you found it hard to see where you were going (literally).

Mind you, this wasn't so bad if you were a guy, since you could just hope you hit something and then return to the fun. But women, especially those in longer evening gowns, had much more trouble -- not only did they have to slog their fancy shoes and low hems over the soiled floor of the port-o-let, but they really couldn't see where they were sitting when they had to go. I imagine more than a few of them sat in the wrong place, or in a pool of spillage. 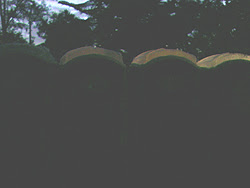 Given this, at 830pm my companion said she had to go to the bathroom but didn't want to chance the situation at hand, so we chose to leave and pay a quick visit at the 7-11 down the street before heading home. We were not the only ones to do so at the same time, believe it or not. We found at least 50 people waiting for their cars at the valet by the time when we arrived at the station, and we saw many more behind us, some of them dancing about, preparing to leave as well. Collectively, I'd say about half the guest lists left before 9pm, which was when the cake cutting was to happen.

As my companion said when we reached the car, "I bet the 7-11 up the street will be packed."

Interesting side note: While waiting for the valet, we heard from someone that the pool house bath was opened out of necessity at around 8pm for people to use -- but the wait time was more than an hour to get in. Clearly, money can't buy everything.

9 for the wedding decor. 2 for the port-o-lets, even with their fancy no-hands flourishes.

I imagine the wedding planner had some serious 'splainin' to do after the fact -- would it have been that hard to put some lights by the toilets? That's all that was needed, really.
at 16:20