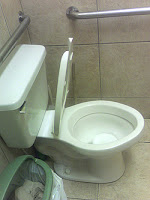 From the front entrance, walk along the left wall of the place and down a short hallway leading to the back corner of the place. The bathrooms are there.

This is a great little Thai restaurant -- perhaps the best in Orlando -- that just happens to be set in one of the worst shopping areas in town, Waterford Lakes. Not that WL offers poor shopping, mind you -- just about every store imaginable can be found here. But the road layout and throngs of impatient young drivers who frequent the area makes getting around here seem death-defying at times.

For example, the other day alone, while driving through here, a young lady in a decked out Toyota Echo (ghetto-style Echo, that is, with rear spoiler, mag wheels, bass-heavy stereo, dark-tint windows and requisite Mardi Gras beads hanging from the rearview mount) backed out in front of us while we were making our way up the parking aisle and proceeded to inch along slowly towards one of the main intersection. Only, after about 50 feet, she turned into a narrow throughway that stretched between two stores and decided to stop her car in the middle of the road. No idea why. Didn't pull over, signal or anything. She just stopped in the middle of the road, and because we were behind her we couldn't move until the oncoming traffic went by! We honked. We motioned for her to move. Did she? HELL NO! A few minutes passed and no one moved. We honked again and then saw that the opposing traffic cleared, so we went around, and as we passed we gave her the "WHAT THE HELL'S WRONG WITH YOU?" motion, which in turn produced a confused look on her face, like she didn't understand why her stopping in the middle of the road was wrong in any way. That's Waterford Lakes in a nutshell. 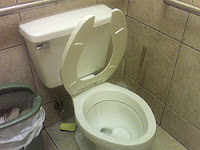 Anyway, back to Thai Singha's bathroom. Yes, while this tasteful little strip-mall restroom houses a cozy little bathroom that's busy with decor, it's located a little too closely to the kitchen to provide much serenity. The walls display artful posters of Thailand, as well as some authentic-looking knickknacks. It's a clean bathroom, though on my visit (later in the evening) it had seen the wear of the day take it's toll on it. The floor was covered in paper towels and bits of toilet paper, and some stains could be seen beneath the rim and in the sink.

But most surprising here is the toilet, whose seat seems to float mysteriously between the all-the-way-up stage and the not-quite-all-the-way-down stage. And, of course, it's not that you can't push the toilet seat all the way up and have it stick there -- you can. You can also put the seat all the way down if you like (no, it won't float up on you, it's not THAT kind of toilet seat). However, if you bring it out a bit from the all-the-way-up stage it will stay there for an undetermined amount of time (I timed it at 3 minutes and it showed no signs of wavering!).

Sadly, a knock on the door prohibited me from finding further information. Damn that spicy, all-too-delicious Thai cuisine served here and our wishy-washy American stomachs -- they always seem to ruin one's pursuit for answers to the world's many mysteries.

6. While kind of dirty, the magic floating toilet seat does have its charm.

I want to know how to say it, not where it is!!