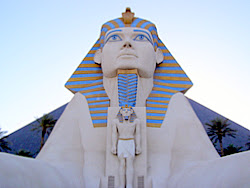 These are harder to find that you might think: In addition to the hotel's already twisted and turned over interior, which has no linearity to it, the casino area itself was undergoing some renovation, which blocked certain pathways and created makeshift ones in their place.

These facilities are found on the north east side of the hotel, in the spaces located between the hallways leading to the north side guest rooms in the pyramid and the edge of the casino. They're near one of the poker rooms -- though which ones exactly, I cannot say, since there are many poker rooms and they all look alike. 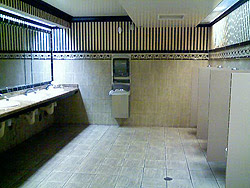 These are decent mass market toilets, though they lack the imagination and class of those found in the Bellagio or the Wynn. That doesn't mean they are mediocre -- these are wonderful, roomy, airy environs, are kept impeccably clean and have all their fixtures in proper working order -- they just can't compete with the waterfall-like faucets and Roman-inspired stonework found at those other locations.

Still, there is much to admire here. The floors and most of the walls are covered with thick sandy tile that looks much like the stone used in the Egyptian Pyramids (it' the Luxor, so you don't really expect anything else); the upper walls are covered with wallpaper that contains a design composed of Egyptian figures and such. The vanity area houses sensor-driven faucets, pumps that dispense a nice-smelling soap and a wide stretch mirror for all to share -- a little dated in design compared to its Vegas compatriots, sure, but clean regardless. The toilets and urinals are the standard white porcelain models. They have beige dividers between them and are kept impeccably clean.

The spot is a bit noisy, given that it's located at the edge of a mammoth casino and a busy thoroughfare, so it's scant on the quiet, but it's still large, well-kept, clean and comforting, which will certainly work if you're in need of a longer visit.

8. A fine, albeit unremarkable, public toilet.

Since you're updating the rest of the hotel's interior, you might want to consider updating these a bit too -- some more modern touches would be welcome.
at 14:40