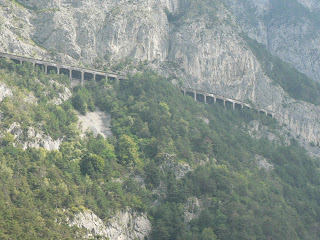 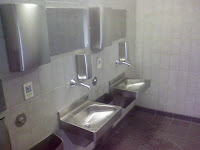 If you drive into Austria from Munich and are heading for Italy as we were, you might just pass by Innsbruck and this stop. We wanted to take in the sights of Innsbruck on our way down south and stopped to look at the information board. Whilst we did that we also decided to use the toilets.

So bear in mind this is a toilet stop next to a busy motorway high up in the Alps. It’s not part of a service station. No fuel, no restaurant, not anything. So don’t expect much. 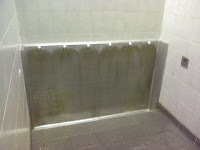 These are the greyest toilets I think I’ve been in, and as a result these are also some of the coldest toilets I’ve been in. And the scale of the place! It’s huge. You could fit coach loads of people in there. So, you can’t argue with the proportions, or necessarily with the cleanliness, but these are some of the unfriendliest feeling toilets I’ve come across. More Eastern Bloc than Austrian Alps.

3. At least they were serviceable.

Even if we shouldn’t expect much for this sort of stop, these toilets are the coldest I’ve come across.