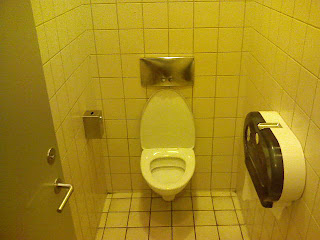 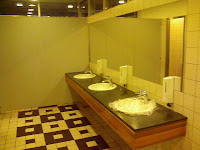 Follow through the airport into the departure lounge of terminal 2. Head left until you come to the To:Go take away café and head right down the short flight of stairs and you’ll see the toilets across to the left.

Sometimes you just rush. This was certainly one of those weekends. A Thursday of interviewing candidates, a mad dash to the airport, just catching my flight, arriving in Copenhagen at 10:30pm. A rush in a Taxi to the conference venue early the next morning, and on, and on. So getting to the airport early and having some time to wonder the shops, grab some sushi, and generally catch up with my body was more than a little welcome. 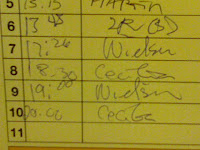 And Copenhagen Airport is a pretty funky as airports go. The shops are full of gadgets you’ll never use but are pretty cool to look at. Then there’s the most expensive deli store I’ve ever been in. Add to that the distinct lack of a McDonalds and the presence of much better quality fare and you have a pretty good all round experience.

I guess that most of the time the quality of the experience is also reflected in the toilets. Indeed, the toilets had just been reopened after cleaning when I headed over. And they were spotlessly clean but they suffered from one thing:

What’s that you might ask. Well, whilst Cecelia had done a good job of cleaning, and had signed to that effect, she was also using the lack of cameras and the privacy of the male toilets in cleaning to have a quick smoke. What resulted was a stench of smoke that pervaded the place. Sorry, Cecilia but you’ve been caught! 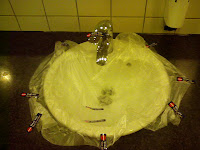 There was also a sink out of order, but then you can’t really complain when you consider the care with which they deal with the problem. Clean plastic seals off the scene whilst clear labels in Danish and English warning you not to use it.

So overall a great place to pee.

7 even with the smells!


Watch out for Cecelia – her smells are the worst thing about the place.