Mc Café Has the Feel 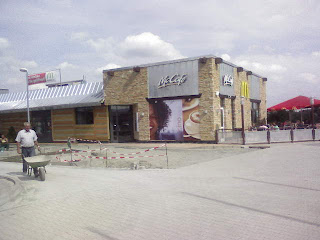 Well first a disclaimer on the address. The place we stopped at was certainly somewhere between Heidelberg and Munich. We took the back roads. We ended up stopping in somewhere beginning with a W after a really pretty stretch which continued for a long while afterwards. Without my notes (they’ve gone missing since I was there), but with a little help from the McDonalds’ finder thing this looks like it was the one.

Once there go from the entrance head towards the counter until you can head right. Go straight across the restaurant and you’ll see a corridor (more of an opening really). The toilets are down there on the left.

The reality that many of us face when travelling for pleasure is inconsistent and sometimes downright disgusting toilets. Some of the worst toilets I can remember were at a truck stop near Arusha in Tanzania. I’ll not go in to the detail, but a score of –2 would probably have resulted. A trip around the newly opened eastern-bloc countries in 1991 also revealed a few basic toilets. The overnight train that headed east out of Munich had toilets that were particularly interesting. In fact it was on this trip that my love of McDonalds grew. Stumbling upon a McDonalds in Budapest meant not only could I have the first western food for 4 weeks, but also the best toilet facilities in that time too. 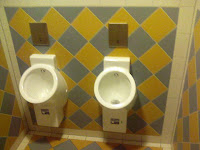 So it was good to continue the tradition in 2007 with a stop in a McCafe. A McCafe? This is McDonalds’ new concept for Germany. Part normal restaurant and part relaxed coffee place. And was it agreeable. Well it seemed to be going down well with the locals. People were not just rushing in and out with the kids as you might see elsewhere, but meeting their friends, reading the newspaper over a coffee and cake, and generally relaxing.

And the toilets? Well they were very new, very clean and well a little odd. These were high spec for Maccy D’s. Tile on the wall. Proper wooden doors. In fact I think they were themed 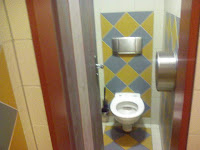 to be toilets in a mountain cabin. At least that would tie in with the local area. Having said they were a little odd they were more than comfortable enough. In fact they were damned right entertaining. Add to that they were warm and cosy and all you can say is that they were a complete success. Well-done McDonalds!

8 for a clean entertaining stop.

Mountain styling is a little odd, but these are not bad at all.