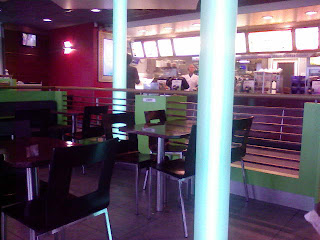 When you enter the restaurant turn directly right. Head down the corridor and you’ll find the toilets on the left. 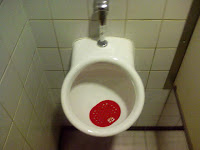 Every little boy in my generation will have imagined themselves with a light sabre. I saw my first Star Wars film aged six. I’m sure real world technology will catch up with film worlds by the time I’m 75. In the meantime I’ll have to make do with this McDonalds in Holland, which has definitely made the light sabre the centre of its design scheme. The green poles of light come out of the floor and you certainly think twice before putting your hand near them.

This place was fantastic, and must have been refurbished recently. Granite counter tops, and open stylish layout make this McDonalds one of the best I’ve met in a while. This was a pretty urgent stop on the way towards the German boarder and the service was slick and the hot chocolate pretty damned good.

So what about the toilet? Modern, different, clean and bright, and the urinal was unusual. But, overall compared to the rest of the place the toilets were a slight let down. Slightly too small as well as being plain. Still, given the need for a stop I was certainly not complaining! 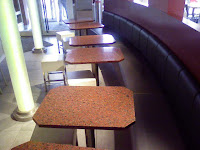 So, if I haven’t said it before, be assured I will say it again. McDonalds have some of the most reliable toilets in the world. The generally high standard and the restaurant’s worldwide reach mean they have to be the traveller’s friend. So, what do I say to the critics of McDonalds? Well realise that you have never travelled further than your backyard in anything other than five star luxury. Consider you are pampered, whinging idiots who need to connect with reality.

7 for a clean entertaining stop.

Comments to the management:

A great restaurant that needs the same touch in the toilets.
at 21:53