Despite Great Food and Service, Facilities at Hurricane Wings Won't Blow You Away 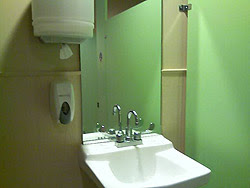 From the front entrance, go to the back right corner of the dining room and head down a long hallway filled with surfboards and other beach-inspired decor and paraphernalia. The bathrooms are about two thirds of the way down and on your left. 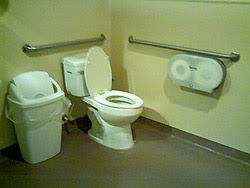 This unpretentious sports bar chain serves some of coldest and most refreshing beer in town, as well as some terrific sports bar fare. The wings alone, which are delicately fried and come coated in more than 30 sauce flavors (my favorites being Gold Rush, Fire & Ice and Garlic Parmesan), are worth the trip alone, as are the steak sandwiches and shrimp tenders.

The decor tries hard to make the place look like its a shack on the beach (bamboo mats cover the walls, as do murals depicting various beachfront views of the ocean), but that tropical feeling is muted by the friendly service, which is attentive and welcoming without being intrusive, and the fact that despite it's tourist sector address the place is visited mostly by locals. It's a place that tries to be something it isn't, but it also realizes that the facade can only extend so far, and it's okay with that. 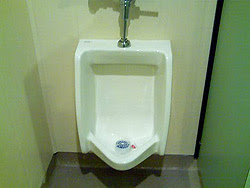 The bathrooms follow the beach-inspired theme of the dining room, with the same mixed results. The walls are painted sandy brown, the floors a dark gray, and the entrance door is covered with painting of fence pickets (like it's trying to be a door to a beach cabana, right?). The stall doors are painted lime green, though, which kind of ruins the tropical feel, as do the smattering of beer ad posters found on the walls. The toilets and sinks are your standard white porcelain variety models. Still, like its restaurant, it's clean and comfortable, and its location, at the very back of the restaurant, adds to the privacy factor needed for longer visits. 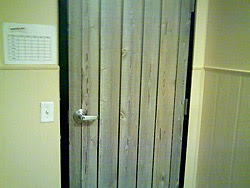 The only major setback, really, is the soap used in the soap dispenser. Instead of having good-quality foam or gel, it spritzes this thin, translucent liquid on you that barely covers your hands. Even after three or four squirts, I felt like I didn't have enough soap on my hands to really get them clean -- and that's a bit of a problem when you're eating messy finger foods.

7. It's a strip mall bathroom that tries to be more than the sum of its parts, and you appreciate that even if the transformation isn't entirely successful.

Time for a different brand of soap. Also, lime green stall doors?
at 16:28