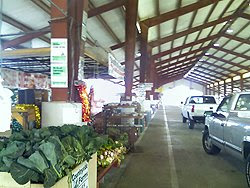 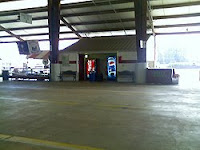 Drive onto the market grounds and head for the big barn, where most of the stands are (or at least they were upon our visit). Drive through the barn and you'll see two sets of restroom areas along the way, both on the right side of the interior of the barn as you drive through. They look like areas for vending machines but actually accommodate both the toilets and the vending machines. 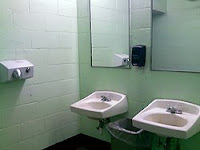 This large farmer's market area contains several buildings, all of which hold various stands that sell a variety of goods when the place is working at full speed in the summer. Unfortunately, we visited in the winter, so the harvest season was already well over and most of the areas where the stands would normally be were closed.

We did still manage to find some vendors (only about 5) working in the main barn building, which was the only place available to us on the visit. At their stands, we found some excellent apples, sweet potatoes, collard greens, grain, meat and more -- which all turned out to be top-notch in quality. Still, we wondered, after leaving, what the place must look like in full bloom. Drag. 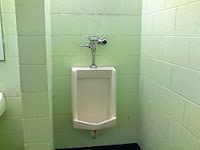 Given that, I visited the first station I crossed inside the barn, not the second, and found them to be quite unique. Not in a good way either, I'm afraid.

The facilities here are made entirely of concrete, from the toilet stalls to the urinal dividers, and the concrete has been painted this sharp lime green that, when coupled with the sting of the fluorescent lighting overheard, give the place an odd tinge that might make you twitch some if you stay in there too long. 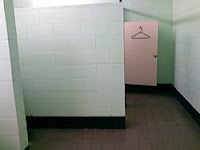 Of course, the green color isn't the only oddity here. Fixtures are your standard white porcelain models, but some of the major plumbing hoses, especially those beneath the sinks, are hanging outside the walls some.

Also, the final stall (the place has two toilet stalls, two urinals, two sinks) had walls made partially out of a beige steel divider, while the other stall adjacent to it was all concrete (with a beige steel door). Why the difference? At first, I thought it had something to do with the last stall being the handicap one, but in examining the sizes of both, it seemed to be they were both identical, this didn't really add up. 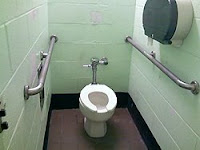 Then I looked up and found a lone clothes hanger dangling from the door to that back stall. I wondered if this was why the last stall was expanded. Perhaps it doubled as a changing room? But then, I asked myself, who would change their clothes at a farmer's market bathroom? Would farmers do that? Maybe. But then aren't they supposed to set up and break down the booths and repack the items that didn't sell? If so, why would they want to wear anything other than work clothes for that? 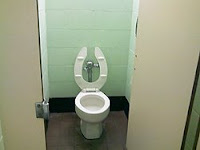 Then I thought they wanted to change into decent clothes after their work was finished, which made sense. But upon reflection, that only made me wonder if that meant they were not taking their unsold goods back to a warehouse or storage area after their shift. If that was the case, then where were they taking it? Very strange indeed.

Anyway, that aside, the place has some other oddities as well. For one, there's a sharp chemical smell in here, and by that I don't mean chemical cleaner but pesticide. It's very strong here, and clearly the management here knows about it because there are five or six air fresheners built into the walls, all of them looking very weathered an unproductive. 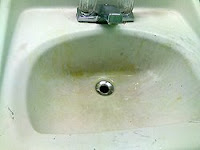 Finally, and perhaps most disturbing, is the fact that there are profound chemical-like stains inside the sinks. Almost like someone was trying to get rust stains off of metal and decided not to rinse away the agent helping them with that task.

You would expect the place to be cleaned somewhat regularly by the managing offices, which are state run (then again, as evidenced by our recent stops at the Port St. Lucie and Fort Drum service stations in Florida, that means nothing). 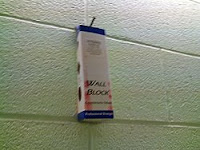 So many unanswered questions....... and this was in the slow season. I imagine more mysteries appear in summer, no?

5. Sturdiness of concrete and strange colors and sights aside, taken at face value the place is still somewhat dirty and smelly.

I would suggest more air fresheners, but I'm not sure they would do anything (since the existing ones don't seem to be making a difference). Of course, the place itself is somewhat clean, but then there are those horrid stains in the sink and the smell, and the bits of grime everywhere. Perhaps a higher grade level of cleaner should be used on them -- but then, this is a farmer's market, so you would expect the cleaners used to be pretty tough in the first place. Really, I'm just as perplexed as you are about this place........ At least the produce we got was top-notch, right?
at 15:50