Bathroom Doubles as Supply Closet at Memories of India 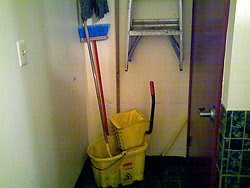 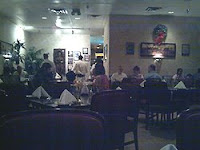 From the front entrance, head inside. This places you at the front of the restaurant's small dining room, which contains about 20 or so tables.

With your back to the door, head along the left wall of the place, to the back left of the restaurant and down the corridor found in that corner of the establishment. Down that corridor is (in order of appearance) the waiter station (on the left), entrance to the kitchen (on the right), entrance to the bathrooms and -- further back -- more storage room.

The bathrooms themselves are off to the left a little, in a little enclave set off from this main passageway.

If you head too far back or get lost, just ask one of the friendly staff for help. 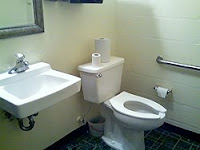 On the outside, this restaurant blends a little too seamlessly with the sterile facade of the strip mall in which its found. If you're not sure it's there, you might pass by it, thinking it was just a regular business. Inside, the place is filled with Indian art, soft lighting and smells of toasted spices. Which is what you expect from a decent Indian restaurant -- and this one is certainly one of the best in the Orlando area.

The food is well prepared, fresh and very vibrantly and evenly spiced -- few other Indian restaurants in town match it for its complexity of flavor, in my opinion. Some come close, but most tend to miss the mark, creating dishes that are too strong in one flavor and not substantial enough in another, thus ruining the balance of the cuisine. Here, there's a balance, at least I think so, and you taste it with each bite. 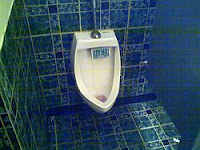 Prices are decent (about $15 per plate on average) and service is friendly and attentive. Plus it's one of the few ethnic restaurants in town where the waiters remember you from your last visit, even if you haven't been in a few months, and even if you have different waiters. I enjoy coming here.

Highlights include the fiery vindaloo lamb, the luscious chicken korma and the tandoori items, which come to the table perfectly grilled and moist (most places get the first part right but tend to dry out the meat). 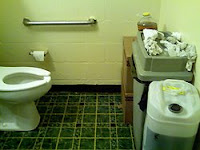 The bathrooms here are a bit amusing in contrast to the careful preparation of the food. While they are located down a long hallway that contains many storage shelves and some storage rooms, the toilet here still double as a place to store items like cleaning supplies and toiletries, which makes me wonder how much storage space does one place need. Perhaps a lot?

Of course, we've seen bathrooms doubling as storage spots before, like at Pizzoodles (where the centerpiece of the bathroom is its storage cabinet) or the Holopaw Restaurant (where the hallway outside was filled with boxes, crates, canisters and more). 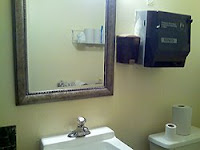 But I've never seen such an overtly high concentration of stored goods in a single public bathroom before. And there's a lot here: Cleaning liquids of all kinds, towels, a mop and bucket, a ladder.... in many ways, this is more a garage than a bathroom, if think about it.

Of course, at the same time, I must commend the place for keeping the environment organized -- not like what we saw at the awful CVS Pharmacy, HWY 80 in Savannah, which was just a bloody, smelly mess despite all the cleaning items found there. The place remains clean despite its duplicitous nature. On my first visit in one evening, I found the bathroom trash can loaded with paper towels; upon my second visit, those towels were gone. That means to me that they police the place well, and that's worthy of my admiration. 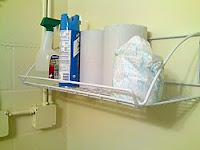 Still, because of all the cleaning fluids here, the place lacks a certain level of comfort you might expect from a regular restaurant bathroom -- especially from one where the dining room is so welcoming. While inside, you often get the feeling that if there's a major spill in the dining room or kitchen, someone will burst through the door and grab whatever materials are needed to solve that problem, no matter if you're busy or not.

Amenity-wise, the place is okay, though also a little piece-meal in assembly: This is a one-bagger, well-sized but also very sectioned, with a single toilet in the back, a sink in the middle and a urinal up front (all white porcelain). A dark blue with gold-trim linoleum tile covers the floor and part of the lower wall near the urinal (no doubt done to compensate for misfires). The mirror about the sink has a brown wood frame and looks like it was picked up at a garage sale. 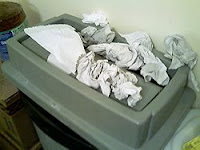 If possible, try storing those items elsewhere. If you can't, then perhaps you can shove everything into a more discrete spot -- no matter how hard I tried, I couldn't hide the impression that I was going to the bathroom in someone's garage -- so it feels more like a bathroom than a supply closet. 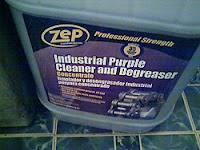