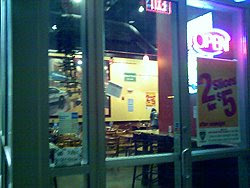 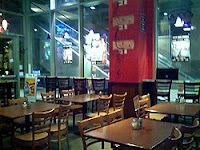 This is a mid-sized pizzeria, square in shape. After entering, you find yourself in the back of the dining room. The kitchen, open to the dining room, sits in the far right corner, taking up approximately 1/3 of the space there.

To reach the bathroom, walk to the opposite corner of the entrance. Once there, you'll see a door marked restrooms -- it's a one-bagger that serves both men and women, and as the sign states it's for customers only. 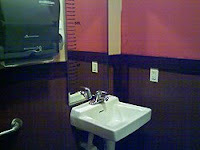 Downtown Orlando is a neighborhood in flux, and place with perhaps too many personalities. The area serves as the city's business district, as well as an after-hours entertainment complex filled with various nightclubs and other hip hangouts. The housing boom of the early 2000's left the area with a number of overpriced condo buildings, many of which are still unfinished because of the current economic downturn of the city (and the country), and as such several of the neighborhood's once thriving streets and happening spots are now empty or subdued. There's still a lot to do here, mind you, but it's also a bit drab in ways as well. 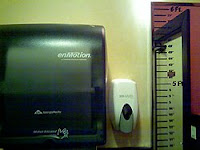 The dining in the area has always been a little hit or miss, and though Downtown Orlando has seen a resurgence of decent places in the last few years, most people with a taste for good food opt for driving north or south for a few minutes for the chance at hitting something better.

This pizza chain, which originated in Orlando and has spread to other parts of the country in recent years, has been a downtown staple for more than a decade. Often, nightclubbers looking to crave some late-night munchies stop by for a slice or two before heading home for the night. The restaurant itself used to be located on Orange Avenue, downtown Orlando's main drag, but a few years back, as the neighborhood began to over-develop, it moved into its current location, in the Plaza office building (across the way, literally, from Bento Cafe), where it has become a happening lunch spot for the professionals in the area. 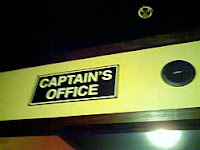 The pizza here is, as the name suggests, inspired by New York-style pizza. It has a thin, foldable crust, is baked crisp, has a good sauce and fresh toppings -- it's top notch pie in a city that has a lot of pizza places but few that are of note. It also offers handful of other pizzeria specials, like hoagies, pastas, salads and such. For a pizzeria, the quality is decent -- if this were in my neighborhood, I would visit regularly.

The decor looks inspired by various sports bars in the area, with mounted flat screens and various posters advertising happy hour specials and such. Service is friendly and down-to-earth and prices are reasonable. 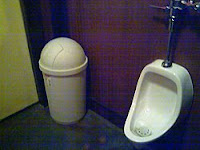 The decor here has been set to look like an NYC police station office. The mirror has height markings, a sign along the top railing reads "Captain's Office" and there's a poster-sized mugshot of Frank Sinatra himself in the back left corner (it's what you stare at while you're on the pot -- which I guess lets you let the Chairman of the Board what you really think of his Duets albums). 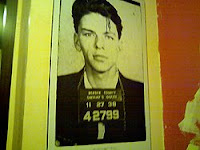 While it has been made to look grungy and of the French Connection era, it's anything but. Walls are covered in brick pattern wallpaper, floors are black linoleum -- everything is spotless.

The main door, because it opens out into the main dining room, at times feels a little too flimsy of a barrier between you and the rest of the place (especially if they're restocking plates, which happens right outside and proves downright invasive) but outside of that, it's a fine place for a pit stop.

A fun place. Only suggest would be to make the door a little heavier or to provide a stronger sense of privacy for the person inside (through music or other means).
at 14:54