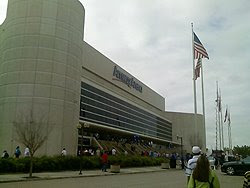 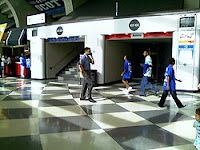 So to get there, find that area via the signs pointing to them, look across the hall from them -- you'll see a large tiled divider wall (almost monolithic in size, really). Go behind that wall and you'll come across the bathrooms. 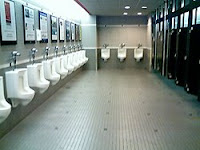 Orlando's main arena, home to the Orlando Magic and big concert draws, this large stadium seats around 17,000 for most basketball games and concerts. It's a pleasant enough place to enjoy such an event, though the echoes and acoustics can be a bit of a strain -- as much sound seems to get stuck in its many upper corners.

Like most arenas, it has a number of attractions, from various gift stalls selling T-shirts and other wares, to an assortment of food vendors, offering an array of fast food and such. Seats are of the plastic fold-down variety -- not too comfortable, but not as bad as other venues I've been to. 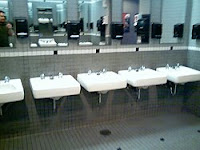 The bathrooms here are enormous, multi-person and cavernous. In fact, walking in one it really looks just like a being in a cave -- only this cave is lined with urinals along its perimeter.

And it's not as dank as the cave-like bathroom at at Pulkovo International Airport in St. Petersburg, Russia, but that's only because it's much larger than that. Still, this is very much a cave and nothing else. 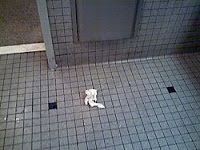 Essentially, the facilities here consist of one long room. A barrage of sinks (all white porcelain, with single mirrors over them) covering both sides of the walls greets you once you step inside. Beyond that is a long single room that has dozens of urinals fixed to its left and back wall and a long row of toilet stalls along the right wall.

The urinals have no dividers between them, and black metal makes up the stall divider walls. Various posters of upcoming events hang above the urinals -- which is better than nothing, I guess. The upper walls are covered in beige tile, the lower walls with a drab gray tile. That same colored gray tile (albeit smaller) covers the floors, which is also dotted with small black tiles for highlights -- similar to what was seen at Theo's Kitchen, only on a much larger scale. 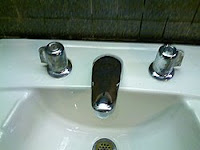 What's amusing here is that a lot of the fixtures are dated. The sink faucets, for example, are the old-fashioned turn-on variety you used to see predominantly several years back. I haven't seen faucets this antiquated since visiting the Delta Crown Room in the JFK International terminal.

Also, this is the only place I've ever seen advertisement stickers placed around the piping of the toilets -- a very strange place to place an ad, I think, since you can never really see the entire ad. So far, I've seen business cards and fliers placed in the bathroom (like at that horrid CVS Pharmacy in Savannah, GA) and I've seen printed pieces of paper taped to specific areas of the bathroom (like at the scary Goyan Gip Korean Restaurant), but I never have seen stickers wrapped around piping. First time for everything, I guess. 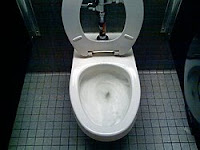 That aside, the place was pretty clean as a whole -- though I visited during the opening minutes of a basketball game, so few had made their way to the bathroom by then. I've made other visits while attending other events and the bathroom was far messier then. For this one, I found some trash on the floor, some spilled water and pee and some foul odors in the air, but nothing too horrible. (It's been worse on subsequent visits.)

Still, outside of the sheer size of this cave, there isn't much that's memorable here. Utilitarian at best, and best experienced early on in the game than later as it gets pretty crowded during halftime and on the way out. 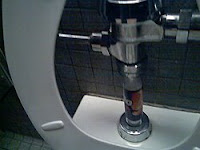 6. Really a 5, but that one visit, where I was the only person in there, really added to the experience.

Update the fixtures and keep it cleaner when the place is being swamped -- both things I'm sure you already know, though.
at 13:39