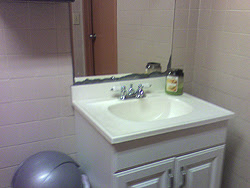 Seemingly simple to find but in reality considerably tricky.

From the entrance, head to the western wall of the restaurant and slip into a little hallway there marked "Restrooms." From there, you will find three doors, neither of them marked. Only one leads to the real bathroom. (Hint: Try the one to the far left.)If I were Frank Stockton, I would say there were tigers behind the other two doors. But alas, one led to a supply closet and the other to a water heater/plumbing area. 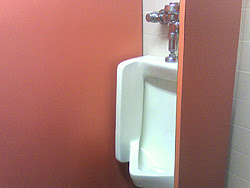 A bit on the scary side.

The restaurant has an interesting decor in that it's walls are covered with wallpaper featuring various Korean letters and its ceiling is made entirely of mirrors -- which means that when you look up, you see an endless array of Korean lettering. However, the cheap Formica tables and odd smell (almost exactly like that found in an Oriental supermarket), offset the charm to some degree. 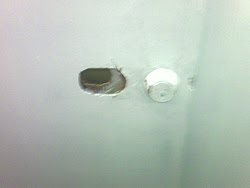 The food is good, and of good quality (though there are a few better Korean places in town), yet that smell looms over everything. Yes, you get used to it after a while, but do you really have to?

The loos aren't much better. While they appear somewhat clean on the surface, closer inspection reveals many items here to be in some state of disrepair. The sink looks like it was picked up used from a street corner and left in the state it was found. The fixtures happen to be both shiny and grimy at the same time - a quality worsened by the fact that there is no hand soap here. (This, of course leads to the question: Which is worse, rinsing your hands without soap or touching the sink knobs?) The floor tiles are chipped. The stall feel oddly unclean. And, worst still, the ceiling has an open hole in it -- no doubt a light or fire alarm was moved and the owners didn't want to bother plugging the gap. 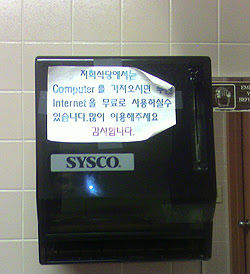 Even stranger is a homemade advertisement -- in Korean, no less -- for electronics found taped to the paper towel dispenser. What is the deal with this? Can't you at least afford a real sign? Does the person who put the sign up actually think he'll get business this way? Do people really call? Does the management know the ad is there (surely they must, right?) Does anyone think this is reputable? And.... what if the scheme works? Weird, just plain weird.

3. Needs a serious revamping here. And perhaps a table out front to house actual ads and fliers for computer salesmen.

Why not make the bathroom's design as clever-looking as the restaurant's interior (minus the smell, that is)? Also, I'll be curious to learn the success rate of the computer ad on the towel dispenser......
at 14:13