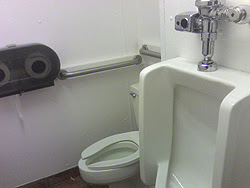 The restaurant has taken over a former Pizza Hut, so the bathrooms are essentially in the same location as where they would be in a Pizza Hut: In the front of the building, beside the cashier and the opening to the kitchen.

Give this neighborhood joint some credit. Outside of some places, Orlando isn't really a town know for its quality ethnic eateries -- most of what we have is chain restaurants. So for a place like this to survive -- and in such a working-class part of town, of all places -- for almost a decade is something of a small miracle.

And granted, part of that success may be the fact that Greek restaurants don't stick around too long here. Outside of Olympa on Colonial Drive, most of the Greek places have been around five years or less. This one isn't exactly the best in town (that would be Mykonos in Longwood) -- and some of the food is hit and miss, it's still a charming little place, and if I lived in the area I would visit more often. 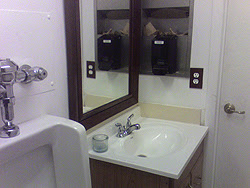 Having said that, the bathrooms here need considerable work. They are much too small. So tiny, in fact, that while in them I actually thought I was in a tiny, out-of-the-way toilet in Europe. Nothing against the Europeans, mind you, but (if I may stereotype) because Europeans built their buildings first and their bathrooms second (a logical progression, really), most of their restrooms (save the moderns ones or the ones in more luxurious areas) tend to be very small and tight-fitting (especially those in France). This restaraurant's bathroom fits that mold to a tee: A bathroom of this size could certainly not accomodate people as rotund as most Americans (how I managed to get in and do my business is still a great mystery!). And yet the designer (who really just revamped a Pizza Hut loo) has the gall to include (at least in the men's room) two stations here, when really there is barely enough for one.

Stranger still, people here enter through a main door and then pass through a sort of foyer -- really, just a two-foot-by-two-foot corridor that is barely big enough to squeeze through because you have to make room for the doors to swing open and closed on both ends. While passing through, I thought, "Geez, this is small, but at least the bathroom will by roomy, right?"

Wrong. Pass through the foyer and you'll enter that restroom that's barely got enough room for a toilet, let alone a toilet, urinal and sink. Everything feels jumbled and placed on top of itself -- which makes the idea of relieving yourself all the more difficult, since all the jetting-out fixtures force you to analyze the space around you (and how to use it) before you can actually get down to business.

Worse still, the room isn't nearly as clean as it should be. I found water stains on everything from the toilet to the urinal to the sink -- and the weathered-looking pics of the Greek Isles did little to make me forget about that. You'd think it'd be easy to clean the place up, given how small it is, right?

4. Up from 3 simply because the appetizers were good enough to merit a return.

It's Orlando, so perhaps adapting your restroom to the city's urban-sprawl model might make for a more enjoyable experiencing. Cleaning the place a little better would help as well. (Also, consider adding some flavor to your pastisio recipe, which is much too bland for it's own good.)
at 15:48