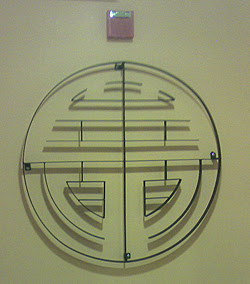 A long ways away. From the lobby, follow the "Restroom" signs all the way down the lengthy hallway leading past the black box theater here (there are two theaters here, one on each side of the lobby), around the corner, back through a few twists and turns, through a set of double doors and into the lobby of the office building behind the theater business itself. Then, head forward and stay right -- go left and you'll come face to face with three elevators -- and enter a little enclave there. The bathrooms are located there. Just look for the out-of-place-looking Chinese-style wall hangings for a sign that's you're close.

It's the public toilet for an office building, so it's pretty clean and well-kept and even somewhat stately in appearance. Marble tiles cover the floor and walls. Sinks and the paper towel dispenser are automatic. The stalls and urinals are spotless with solid, well-maintained metal doors between everything. The decor is light and elegant.

And while this makes it out to be a very well-kept toilet, it's also a very busy place -- too busy for any interior pictures, I'm afraid. That's because it's used not only by theater patrons but also the by the people who work in the building it's housed in and the various people passing by on the street who need to make a quick pitstop before heading somewhere else.

On one of my visits, a shabbily dressed drunkard walked in and utterred his amazement with the fact that the automatic paper towel dispenser went off when he passed it while heading to the urinal.

"Shit, that gets me every time," he said.

I just smiled and walked away, though the fact that he said "every time" kind of stuck in my head. I guess locking the building door would have been too much to ask?

6. Would have been an 8 or 9 were it not for the vagrancy factor.

I've said it before, I'll say it again: I guess locking the building door would have been too much to ask?
at 16:40