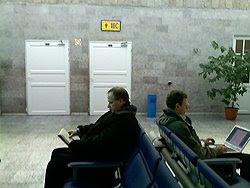 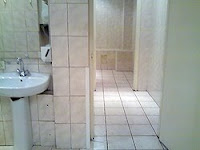 After passing through security, you go up a set of escalators and immediately enter the airport's modest duty free shopping area, which consists of about six stalls, each of which houses the same or similar-looking Russian heritage souvenirs (vodka, matreshka -- or nesting -- dolls, etc.).

All the stalls are found along the wall opposite the end of the escalator. The toilets, while facing these stalls, will be to your left, across a smal sitting area and beneath a bright yellow sign reading, "WC." 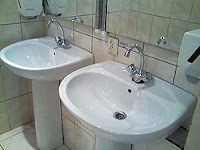 Despite St. Petersburg being a city of 5 million (and the third largest city in Europe, after London and Moscow), its international airport is surprisingly small, housing only eight gates in all. Pulkovo 1, the city's domestic airport, is considerably larger -- something I expect to change in coming years as tourism to St. Petersburg becomes more of a mainline business. At the moment, the city is wonderful to visit but still a bit difficult to manage for the non-Russian-speaking traveler without a guide.

The bathrooms found in this location (the only ones available to those departing from Pulkovo 2 after passing through the security and ticketing area, are strangely cave-like. They are long, stretching and quite foul smelling -- with the aroma being a strong mixture of urine and feces. There are no windows and, from what it looked like, no proper ventilation. Just the room itself, it's fixtures and stalls, and that's it. 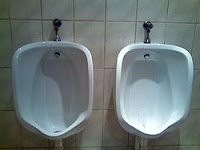 Because of this, not only do the smells linger long here, but the voices of conversing visitors also echo and carry, making longer visits a bit nerve-wracking. I would liken the experience to hearing someone trying to make ghostly moans while you're trying to relieve yourself. Not exactly ideal conditions, if you think about it.

On the plus side, the designers have tried hard to disguise the cavernous feel to the place. The lighting is bright, and both the floor and walls are covered in shiny while tiles. But still, the place is deep, and noises echo here, and you can't help but feel a little claustrophobic while inside, no matter what attempts to cover that quality may be. Though, having said that, it's not nearly as claustrophobic as other bathrooms visited in the city, like those experienced at the Petro Palace lobby or the SkyBar. And really, the only reason for that is that these accommodate more people than those. 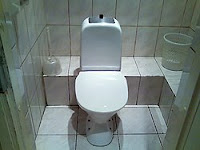 Fixture-wise, the place has white porcelain toilets and sinks, each of which were in fine working order when I visited (though the stink around the commodes themselves were particularly awful and inescapable -- thank goodness I just had to pee!) The commodes themselves have a unique design -- a round basin, like most others, but a tank that looks like a cross between a tombstone and a submarine head. Go figure.

6. Would normally be a 7, because it's so clean, but I took a point off for the smell and dank, cave-like feel to it. Very bad smells in here.

Air fresheners would be good to add, or maybe cut in a ventilation fan in the back, where the toilets are. There needs to be some air circulation in here.
at 14:58