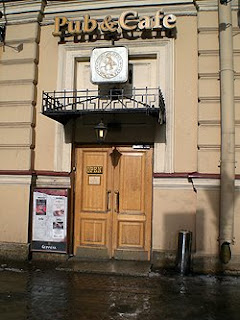 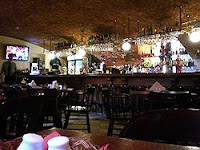 Go through the main entrance and you'll immediately come face to face with a coat check station. Behind that station, and a little to the right, is a small hallway leading to the toilets. The men's room, it should be noted, had a poster on it displaying a poem devoted to beer. 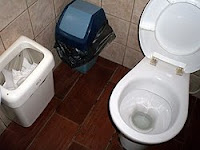 This cozy establishment, located in the courtyard blocks between the Hermitage Museum and the Russian Museum, works two distinct angles: Cafe and restaurant (and in Russia, there is a thick line dividing the two). Step through the front door and you must choose which direction to take: The left leads you to a modest cafe filled with a variety of sandwiches, pastries and coffees -- perfect for a person wanting a quick bite before hitting the streets again. The right takes you to a homey, brick-filled tavern boasting a full menu and dozens of beer on tap, as well as an assortment of other drinks. 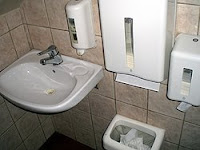 I opted for the restaurant end on my visit, since I'd been touring the city extensively that day and wanted to rest a while. The menu here is pretty extensive, offering everything from traditional Russian dishes to classic bar fair like burgers and steaks. I went with beef stroganoff and a soup course (solianka) -- both were superb renditions of the dishes, particularly the stroganoff which was creamy, meaty and placed over delicate noodle dumplings. 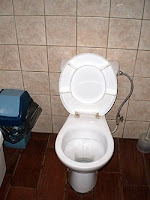 The bathrooms are reminiscent of the ones experienced in the Petro Palace's SkyBar. They accommodatie only one person, they are tight-fitting, small, a bit crammed, but they are not as tight as the Petro Palace lobby toilets or the SkyBar. Not to say they are roomy either: There is just enough room here to move around and position yourself properly without feeling like you're going to bump into all the fixtures.

It's cozy here, to say the least, and the effect is rather closet like, and after a big meal at the restaurant here, a little more spacious surroundings feels in order. You want to come in here feeling large but leave feeling small, if you catch my drift, and the place just isn't large enough for that, not unless you've got no other choice. (Great for a quick pee, like the SkyBar, but that's about it.) 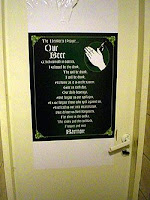 On the flip side, it's very clean here. Even the wall-mounted plastic trash can, which was half-full, seemed spotless. Quite impressive. Design-wise, the walls are covered with sandy-colored tile and the floor is covered with that deep brick tile we've seen in countless places, like at Maurice's BBQ in South Carolina. Not bad choices -- certainly a bit more Western than what we found at the European-inspired Petro Palace or SkyBar.

Fixture wise, the place has your standard white toilets and sink, along with plastic add-ons attached to the walls, like a toilet paper sheet dispenser, paper towel dispenser, soap dispenser and more. Many of these add-ons, it should be said, were within a foot of one another and could all be easily grabbed while sitting on the commode. Yes, it's a small place.

8. Very clean and comfy, though like the Petro Palace lobby toilets they are just a bit tight as well. Not as tight as they are, though, so I put it on equal footing with SkyBar.

Because this is a full-service restaurant, people visiting the bathroom here will tend to take more time in their visits than they would at, say, SkyBar. I realize space availability makes expanding this area hard, so perhaps you want to position a mirror or perform a similar tactic to make it look like you have more space than you really do.
at 16:02

this is one of the funniest blogs I've seen....

keep up the good work!