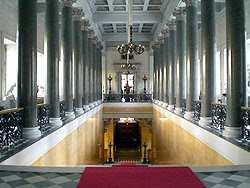 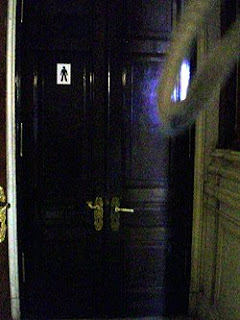 This mammoth museum, the second largest in the world behind the Louvre in Paris, spreads itself across five ridiculously large and ornate buildings. There are more then 350 rooms of art and design work collectively here, and ironically only a handful of public toilets.

The ones visited here are at the bottom of the Council Staircase -- which, given the complex layout of the place, you will most likely need a map or guide to find. (Most of the attendants don't speak English, and while they're eager to help understanding their directions can be difficult.) 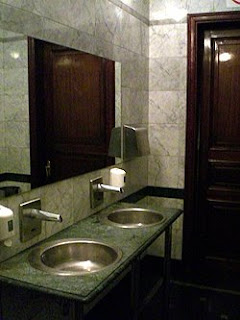 Visitors here literally can step into the shoes of the Tsars and easily imagine what life was like for the rulers who once lived within these walls. Walk up and down the many grand staircases in the palace. Marvel at elaborate stucco work surrounding many of the passageways and doorways, much of it encased in gold leaf. Stroll through rooms of intricate granite and marble work. Saunter down hallways that stretch for hundreds of yards, many of them covered with ornate murals and frescos. This is regal living at its finest, an experience as opulent as Versailles, but without all intentional ostentatiousness. On top of this splendor is the museum’s art collection, which was started by Catherine the Great in the 1700s and now consists of more than 3 million items, 150,000 of which are displayed at one time inside the museum. Here, you’ll find rooms devoted to the works of Gaugin, Titian, Picasso, Rubens, Van Dyck, British art, French Impressionism, Egyptian and Greek artifacts and much more.

Given that, you would expect to find some seriously impressive toilets here, something along the lines of the Bellagio or Wynn Las Vegas, which have become benchmarks now for high-end toilet design and comfort. Sadly, you don't even get something as straightforward as the toilets found at the nearby Grand Hotel Europe. 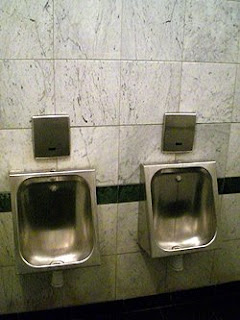 The entrance is impressive enough, at the bottom of the Council Staircase, which is a mammoth staircase that has been built to look like it has no supports -- almost like it's being held up by some sort of magic (the secret, you learn later, is that the support beams have been built into the structure instead of underneath or over it).

The entrance chamber comes filled with beautiful marble tile on the walls and floor. The sink vanity, found in this area, contains two sink stations set into a marzite-like counter. A stretch mirror hangs over the counter, with soap dispensers and towel dispensers to each side. The sinks are both stainless and have stainless faucets over them with automatic flow control. 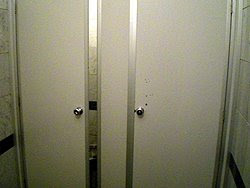 A nice beginning, yes, but step in further and it turns into a place fitted solely for function -- and a gross one at that. The two urinals here, found on the back wall, are made of stainless steel and look more like those water fountains that you used to drink out of back in grade school than actual urinals. They hold no urinal cakes in them, making the smell of urine emanating from them quite sharp as a result.

More surprisingly are the commodes. they sit behind these monolithic stall doors, which make you think you're in for a major surprise when you open them. 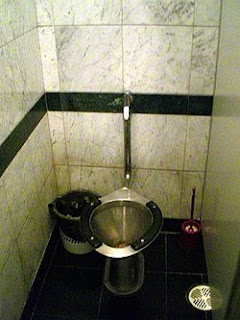 Boy, is that right! The commodes here are some of the worst I've ever seen. Like the urinals, they are also made out of stainless steel. They are small, tiny bowls with a couple of black plastic strips nailed to them, which apparently stand in for a proper toilet seat. I can't say I felt tempted to sit on those two strips -- they looked more like a place to plop your shoe so you could tie your laces than to rest your bottom.

If that weren't enough, there was no paper in the stalls, only a wastebasket and a toilet brush. And of course the toilets came filled with much rank human deposit -- I didn't see a flush option on the toilet, and apparently neither did the other people who visited before me. The odor was pretty horrific. The site of all that excrement was far worse! 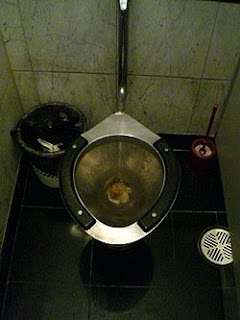 Several million people visit this museum each year, so you'd expect the cleaning crew to be on these bathrooms the minute a mess was made. So that definitely needs to be fixed. Also, the addition of some toilet paper in the stalls would be nice. And a clearcut way on how to flush! Finally, how about a proper toilet, not a stainless steel one with two plastic bars taped to it. I'd prefer a hole in the ground to using this, I must admit. Ick.
at 14:26