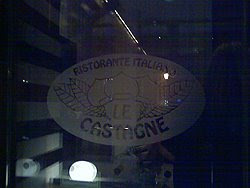 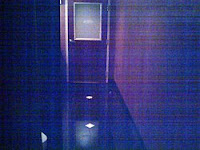 This restaurant is located inside a building and not out on the street itself, which may make it hard to find to begin with for those who expect their restaurants to be free-standing buildings or at least to have an awning outside signifying where they are within a set complex. 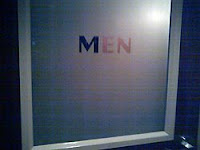 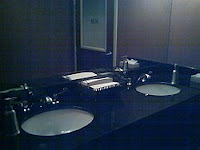 Given that, you expect a pretty straightforward design. But no. The dining room is hard to spot because when you enter because you will see that the designers have placed many white curtains around it. This has been done, I assume, so as to provide as much privacy as possible for the diners, while also providing them with a bit of a dreamscape setting. It looks stylish, yes, but it's also a bit hard to navigate because it takes away the natural contours of the room, making it seem wavy and round instead of angular and straight.

Given that, to get to the bathrooms, head the back wall, using the bar as a place setter -- since it's entrance is also along the same wall. Once there, head to your left, deeper into the dining room, until you come across a small staircase on your right. Go down that staircase -- it brings you to a basement hallway where you'll find the bathrooms. 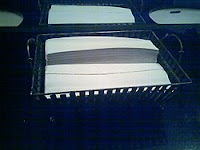 The restaurant itself is a very good Italian eatery that, according to its menu, serves northern Italian specialties. I actually thought the food here was more Roman-inspired, especially in its emphasis on roasted meat and seafood, but there are plenty of delicious pasta dishes and other specialties on the menu worth investigating, including a gnocchi alfredo that may just be one of the richest, most decadent pasta dishes I've ever had. Two bites, and I was ready to sleep. No fooling! 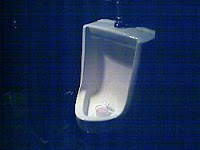 Not surprisingly, the toilets, like the dining room, show off lots of design flash. They carry art deco undertones, especially in their signage and colors (solid reds over matted greens, for example). The amenities share in this design concept: The two-station sink features matted metal faucets, free-standing stainless steel soap dispensers and wrought iron paper towel racks. Toilets were standard white and appeared in decent shape.

However, it is very dark in here -- as the pictures I've taken suggest. So dark, in fact, that I started wondering what the place was covering up. A little dimness adds style, after all, but a lot makes you think something's up. 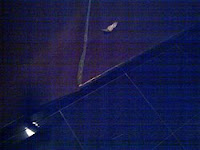 After a little investigating, I found parts of the red wallpaper covering a majority of the walls starting to peel up in spots, and after seeing that I had a good feeling that perhaps there was even more wear and tear present there, only I wouldn't be able to find it without putting up some major lighting. (And my investigation was cut short because other people entered the bathroom and I didn't want to look like I was some sort of nut, so.....)

6. Decent, except for the dim lighting and the bits of disrepair you find when you start looking below the sheen and gloss of the surface.

Please add some more light to the place. It really needs it. After that, you might want to give the facilities a good once over to make sure there aren't any serious flaws that were obscured by the darkness. You have a wonderful restaurant, and it deserves top-of-the-line toilets.
at 13:50