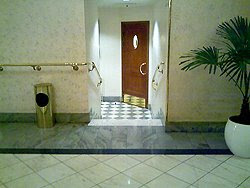 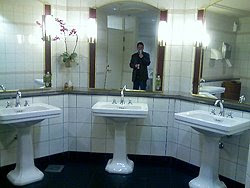 Across the hall from the hotel's Lobby Bar. From the main entrance, enter the hotel. When you reach the first cross way of hallways, turn left and go up the carpet-covered stairs. At the top of the stairs, you'll find the Lobby Bar will be on your left and a sunken hallway on your right. Enter that sunken hallway to find the toilets. 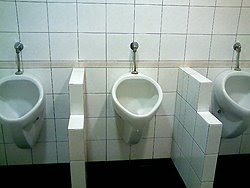 This high-end luxury hotel located on the heart of Nevsky Prospekt, St. Petersburg's main tourist drag, is often cited as being one of the 50 best hotels in the world. Having stayed here, I can say that it's a very upscale place, with comfortable, ornately furnished rooms, a helpful staff, a great location that puts you within walking distance of many of the city's big sites, and some terrific dining options. 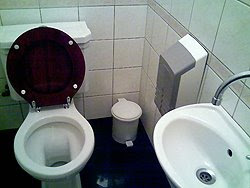 Given that, you would expect the public restrooms here to be something that rivals the quality of the toilets at, say, the Bellagio or even the Luxor in Las Vegas. Sadly, they're not quite in that league, showing neither the creativity or opulence of those locations. Instead, they are better than average facilities with a few unique design touches and little else.

What's neat about the place is that it fits into a sort of irregular heptagonal shape, instead of being merely a round or rectangular room. The toilets, each in roomy stalls that barrier you completely from the rest of the bathroom (thanks to floor to ceiling stall doors), are found on the left side of the toilets. Opposite them are a stretch of three urinals, each separated by thick tiled dividers that only go up waist high (so that they merely mark territory instead of offering privacy as well -- something I didn't care for, despite the pretty look of the design). 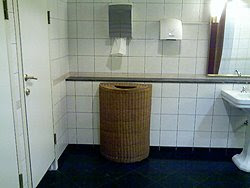 In between the commodes and urinals are a set of three sinks, each of them fitted along the angular curve of the room's heptagonal shape (the room's most impressive design flourish, I must say). The sinks are all pedestal models with bronze fixtures. Ornate mirrors hang over each of the three sinks, respectively, with ornamental lighting (turn-of-the-century in style but also with a touch of modernity to them) interspersed between. A wicker waste basket sits to the right, below the paper towel dispenser.

White tile covers the walls, and a single sheet of black linoleum covers the floor. No wall hangings or other decorations are found on the walls (a complete contrast to the immensely ornate lobby outside, which looks like an extension of the nearby Hermitage Museum). Some art inside the bathrooms would have been appreciated, I think. Not to the extent of Savannah's Mansion on Forsyth Park, mind you, but at least a little to extend the mood of the lobby some, which really is very impressive. 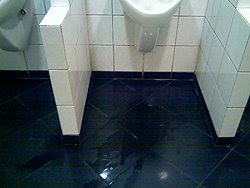 Cleanliness-wise, the place is also a little hit or miss. Overall, it's very clean, but one of the urinals was leaking pretty badly and floor below it was drenched in water. Also, there was a slight-but-noticeable smell of urine in the air, which could have been avoided with some air fresheners.

7. It's a nice bathroom with some neat design flourishes -- a worthy pit stop to make while strolling Nevsky Prospekt. But it's certainly not up to par with the rest of the hotel.

The key here is to make the bathroom an extension of the hotel's grandiose lobby. That doesn't mean carpet the whole thing, or include marble statues in the free spaces, but at least put some effort into it. Don't just leave it as white tile, black linoleum and a wicker basket. Add some art or classic Russian-royalty-inspired items to the mix -- and keep it clean and odor-free. Your hotel is often cited as being one of the best hotels in the world, and you're public bathroom should live up to that hype as well, I think.
at 13:43