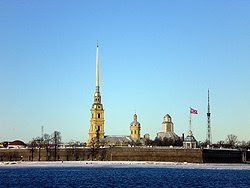 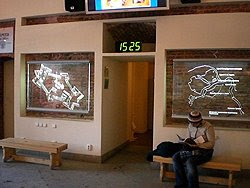 Built in 1704, this military complex is the oldest building in St. Petersburg. Ironically, it never saw battle but instead became one of Russia’s most notorious political prisons. Some of its former tenants include legendary authors like Dostoyevsky, Chernyshevsky and Gorky, as well as Vladimir Lenin’s brother, who attempted to kill Tsar Alexander III and was executed here soon after he was incarcerated. 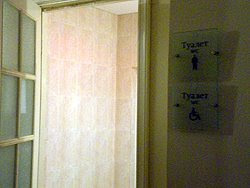 The centerpiece of the fortress is the Peter and Paul Cathedral, a modestly sized (at least compared to the city’s other offerings) yet ornate church that happens to be the city’s first religious meeting place. In addition to its glorious Baroque architecture and stunning frescos found here, it also holds the sarcophagi of all of the Russian Tsars, from Peter the Great through Nicholas II -- a feature that also adds an air of creepiness to your visit.

Also on hand in the Fortress are a dozen or so small museums dedicated to topics like Russia’s military past, Russian space exploration and the national mint. Particularly charming is the 28-room exhibit devoted to the evolution of the city of St. Petersburg, which tracks its history from its Norse roots through its communist heyday and its current role as Russia’s cultural capital. 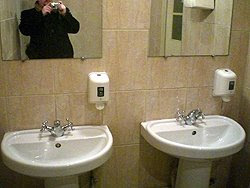 The bathrooms in the ticket office are a strange creation indeed. They feature two toilet stalls, which are separated by the standard floor to ceiling dividers that are common in Europe (I have to say, I like this feature -- American stalls on the whole just don't offer you enough privacy), along with two urinals (without dividers) that are hooked to a very primitive automatic flush mechanism (the mechanism, essentially, is that they flush continuously, no just when you're done).

Given that set up, you expect the toilets here to be devoid of the stench of urine. Sadly, that's not the case. They are a bit smelly, though nothing as sharp as what I encountered at Catherine Palace or the Russian Museum. 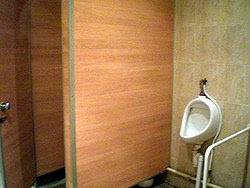 There are two pedestal sinks here, with flash mirrors and soap dispensers positioned over them. They were somewhat clean but could have used a bit more of a scrubbing. The walls here are covered with classy rust-colored marble tiles, the floors with off-white square tiles. The divider walls separating the two stalls are a deeper rust color than the walls and are made of fiberboard and covered with a patter that makes them look like they are made of fine-grade wood. Kind of strange, I thought, to design a place that has some great tile work but then undermines that quality by putting up tacky stall dividers and other add-ons.

Also unique here is the floor mat placed outside the entrance to the bathroom. It was more like a burlap rag than a mat, and it had been so overused and was in so desperate need of replacement that when you stepped on it to sop up some of the slush your feet picked up from outside (I visited in the winter), it did little more than stick to your feet and threaten to tear apart like a soaked, poor-quality paper towel. Pretty gross. 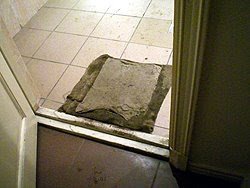 Finally, and most upsetting, I found a person inside the back stall here kicking the toilet repeatedly. And I mean kicking! He was yelling at it and kicking it, and every now and then you heard the bonk of his shoe as it made contact with the basin. Why he was doing this, I had no idea -- perhaps the idiosyncrasies of the design had finally taken him beyond the breaking point?

Needless to say, after witnessing that bit of bathroom violence, I took my pictures and got the hell out of there. Ironically, I almost tripped on the ratty rag on my way out.

5. Nice tile work, and somewhat clean, but why are there all those strange additions that negate your positive points. That made me wonder what was going on here, really. Is this bathroom some sort of postmodern expressionistic art? Or something far more frightening?

Get a new mat for your feet. Scrub the sinks and toilets a little more. Add some air freshener. And post a guard out front to make sure no more toilet-kicking crazies get in to satisfy their fetishes.
at 15:13