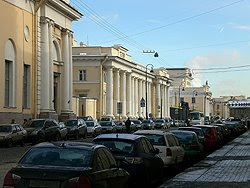 Finding the entrance to this mammoth museum is much trickier than finding the toilet, believe it or not.

First, to locate the building, head towards the Church of the Savior On Spilled Blood, a majestic onion-domed structure a few blocks from the nearby Hermitage Museum. The Russian Museum is located to the right of that church.

To get a general idea of where the museum is (and it's funny that the entrance is this hard to locate because it's a massive building), look for the sprawling Mikhailovsky Gardens, which are across the street from the aforementioned church. The big yellow building at the far end of the gardens is the museum. 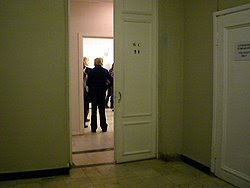 However the entrance is not there. To get to that, you need to back track some on that main street where the church and gardens are on. Go about halfway down until you see a modest door with windows around it -- inside the windows is a set of metal detectors. That's the entrance.

From there, go in, buy a ticket and head for the cloak room. Check your coat and then continue down that hallway, past the cloak room, round the corner beyond it, and you'll find the toilets there. Phew. 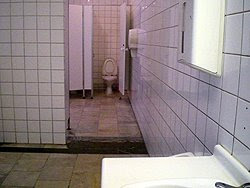 Founded in 1898 by Nicholas II, the last Tsar of Russia, the museum houses the country’s largest collection of nationally drawn art, occupying three wings of the Mikhailovsky Palace. Whereas the Hermitage is stately and elegant, this museum boasts a more playful, down-to-earth side, hosting exhibits by both modern and classical Russian artists alongside its main collection. What's most surprising here is how visitors can witness the way Russian art, especially over the last two centuries, has evolved in a similar manner as American art. Make a point to visit the rooms devoted to modernist and cubist styles for proof. 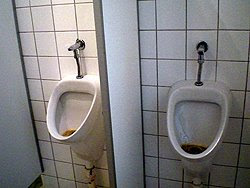 Like many of the other Russian bathrooms visited on this trip, the toilets here are somewhat dismal and smelly. Design-wise, they feel like a cross between the bathrooms at Catherine Palace and the Peter and Paul Fortress. Like the former, they consist of dingy, often mildew-strewn white tile and boast the foul odor of urine. Like the latter, they are positioned in a way that keeps them recessed from the rest of the building and make you think you are going into an environment that's much nicer than it really is. 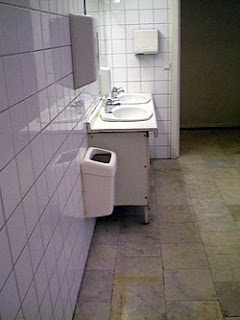 The main detraction here is the dark-tiled floor, which clashes poorly with the white tile on the walls -- so much so that it somehow manages to further accentuate the many water stains found throughout the place. Toilets and urinals are your standard European white varieties, and they are separated by the floor-to-ceiling dividers I've seen throughout the toilets experienced in this country; they are filled with hard water stains and the stink of urine emanating from the urinals is quite pungent, and they look downright filthy when backed by the dark-tile floors of this place. (In fact, these and the Hermitage toilets may be the smelliest toilets I visited on this trip, and there were plenty of smelly toilets here.) 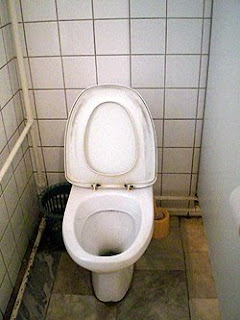 Top all that grime with some shoddy construction, namely in the two-station sink vanity found here, which looked like it'd been pieced together out of found fiberboard. This reminded me of Cecil's toilets in Orlando, which also seemed assembled out of found goods, only these are in much poorer condition. Those at least looked solidly constructed. These looked like they'd fall apart if you put any weight on them.

Worse still was the noise factor: Though the toilets were around the corner from the cloakroom, the chatter and noise of that area still carried well down the hall, making it sound like you were actually doing your business in the cloakroom, if you catch my drift.

3. Though the museum is a wonderful place to tour, these toilets were wholeheartedly unpleasant.

Lots of work needed here. Start by changing the floor to a tile or covering that doesn't look like someone's just tracked mud or slush across the floor. Then shine up the porcelain and tile and put a solid vanity in there and then add some air freshener.
at 14:59