Petro Palace Toilets May Just Be Smallest Facilities in Russia 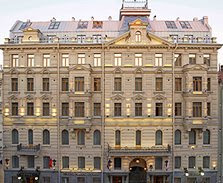 From the main entrance, head through the lobby area, which is filled with several couches and lounging chairs, and head towards the bar at the back of the lobby. At the bar, turn right and wrap around it into the hallway behind that area. Do not go so far as to enter the concierge area or the gift shop, however.

While facing the entrance to the gift shop, turn left, then follow that ever-narrowing hallway to the right. After making a right, you will enter a narrow but stretching hallway. The bathrooms will be right as you enter that passage way. 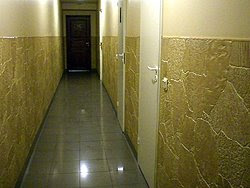 This modest, homey hotel, located just five minutes by foot from the Hermitage Museum, offers comfortable rooms, fine dining and plenty of friendly service -- for a fraction of the cost of some of the city's higher-end hotels, such as Grand Hotel Europe (which is about a mile away). Granted, it's not in the same league of luxury as Grand Hotel Europe, but if you're looking for a comfortable, not-to-flashy place to stay in the city's tourism center (it's about 30 meters from St. Isaac's Cathedral), you can't really beat this place in terms of affability and price (about $120 per night during this off-season visit).

Having said that, the public restrooms available to non-guests here aren't much to consider. In fact, they are some of the smallest I've ever visited -- including such recently reviewed tiny spaces as Club Quarters Philadelphia and Marathon Grill. Yes, these are very, very small -- even for European standards! 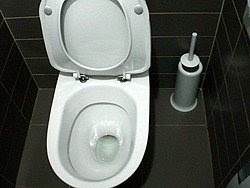 The facilities themselves aren't much more than a five-foot by two-and-a-half-foot room, with a toilet on one end and a sink on the other. There is barely two feet separating the edge of the toilet and the edge of the sink, and while peeing men can actually position themselves in a way so that they can lean against the edge of the sink for balance and still hit the target. This is definitely not a place for people who suffer from claustrophobia.

On the plus side, it was considerably cleaner than most of the other public restrooms visited on this trip, including the toilets found at former royal residences like the Hermitage, Catherine Palace, and the Russian Museum and at rival in-city hotels like Grand Hotel Europe, which was much roomier but not cleaner. On the plus side, at least it was a one-bagger facility, not a multi-person one, like the toilets at the ridiculously assembled Club Quarters Philadelphia. 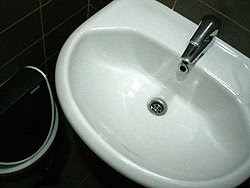 Inside, you'll find the floor and walls covered with shiny, sparkling black tile (arranged in a very straightforward design, not in a way that makes it look elegant and sleek, like at Sensi and the sublime Okada in Las Vegas). White porcelain toilet and sink, also gleaming and well-cleaned and in perfect working order.

They may be tight, but they are well kept, so if you can handle the claustrophobia they are certainly worth visiting if you find yourself in need of a toilet and are in the area (nearby St. Isaac's Cathedral doesn't have public restrooms, for example, so this might be a good stop to make after visiting that).

7. Very clean and well-kept, but the tight fit keeps its score from being higher.

Everything is fine here, except the limited amount of space. If you can, expand a little. Doesn't have to be much -- a little room here will go a long way. You were able to coax a little more space out of you Sky Bar bathroom -- reviewed tomorrow -- so I'm not sure why you can't do it here as well.
at 13:57