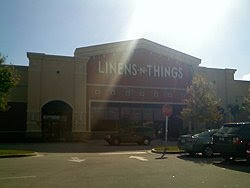 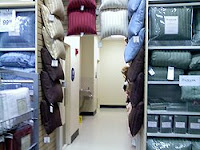 Go to the far back right corner of the store. Once there, look for a hallway that emerges from a display covered with blankets, pillows and sheets. Enter there.

Once you do, you'll follow a wall covered with stuffed animals, each looking more plush and squishy than the one that came before it. The bathrooms are located across the hall from that display of furry cuteness. 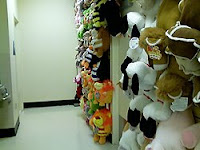 On the surface, Linens-n-Things has much in common with its housewares store cousin Bed Bath and Beyond: Both sell high-end and trendy items for the home. Both fill their stores will elaborate and tempting displays. Both regularly send out 20% off coupons in the mail, which are good for the junkier items in the stores but not for anything you'd actually consider buying without impulse.

Which is better, I'm not sure. I used to think BBB, but then I lately I've been finding more to buy at LNT, and often at a slightly better price. Perhaps I will say this: BBB certainly feels more upscale, and I've had better success with their customer service, but LNT isn't far behind. 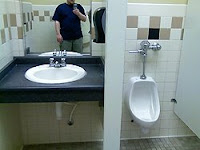 As for who's got the better bathroom: LNT wins, hands down. BBB's toilets, for those who remember, came filled with lame product placements (allowing people to try their over-priced items in a live setting -- which of course should that the items worked poorly and were over-priced) and was also smelly and dirty. LNT's toilets are much cleaner and roomier, and the store designers definitely put a little more imagination into setting them up, as seen by the wall of stuff animals built just outside the facilities. In fact, it looks modeled after the toilets I found at Big Boy Diner and the lobby toilets at Sleuth's Mystery Dinner Theater than anything else. And seeing that those rate pretty highly on our scale, that's no diminishing comment! 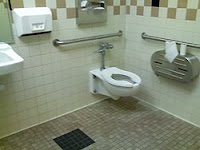 But that doesn't mean these are high-end bathrooms either. Yes, they are somewhat clean (and way above the quality experienced at BBB), but I still found a good deal of trash on the floor here, especially inside the stalls. Also, the beige tile work here and the fixtures (white porcelain, of course, with one toilet stall and one urinal available to visitors) are slightly worn down in spots and could use a good scrubbing and some refinishing. The sink proved particularly problematic, as one of the faucets was aligned straight and the other curved off in a different direction; naturally, the latter was the one that worked properly. 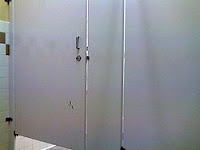 Also worth noting is that the stalls themselves feature some of the widest gaps I've ever seen: You can easily look out into the rest of the bathroom while you're sitting on the toilet here, and that means anyone on the outside can look in on you without problem. Not exactly something I enjoy when I'm in a public restroom, mind you.

Also on the poor side is the bathroom's choice of hand soap: It was clammy and medicinal smelling and dried my hands out pretty well. Not as bad as the SANIS soap I've experienced at Hurricane Wings and Golden Krust, but still not very good. 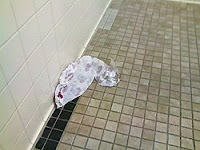 Of course, having said that, I should emphasize that this isn't a bad place to make a pit stop. It's clean enough and quiet enough and removed enough from the rest of the store to provide some sanctuary. And unlike BBB, it doesn't pretend to be something it isn't. I have to recommend it for that.

6. Much better than BBB, but not perfect.

I like the simplicity here and the fact that it isn't overrun with product placements -- like at BBB. But it still needs a bit of scrubbing to feel cleaner and you need to fix the sink and make those stall gaps smaller.
at 13:48