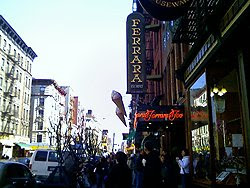 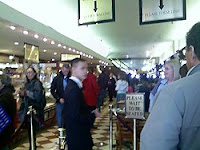 From the street entrance, head all the way to the back of the place. Once there, you'll see a staircase going upward.

Go up those stairs (take care while doing so -- more on this later on) and turn left once you've ascended to the top. You'll find yourself in a small enclave, which will be dimly lit and filled with dark wood -- behind it is a mammoth dining room that looks like it handles special events only. The doors to the toilets will be right in front of you at that point. 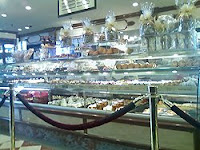 This famous bakery, in New York's Little Italy neighborhood, bills itself as "America's first espresso bar -- since 1892." Those visiting get a sense of the history the minute they step inside.

The interior, a vast old-fashioned parlor area, is filled with brass fixtures, sparkling mirrors, glass lighting and plenty of friendly beiges and browns.

The centerpiece here is the large, elongated glass bakery counter on the left of the store (when you've got the entrance to your back). It's filled with hundreds of selections of sweets, each of which tempts you with its delicate appearance and flavorful aroma. If only I had more of an appetite when I came here.... 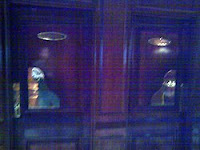 Being an espresso bar, I can say that the brewed coffee is good here though the espresso drinks are much better -- some of the best you can get stateside without roasting your own beans, really. The atmosphere is busy, often tourist-filled, but friendly. Service is quick and professional. Not really a place to lolly with staff but certainly a great place to stop for a coffee and pastry while walking around the city. 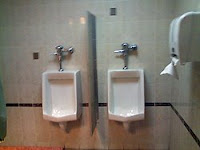 he toilets, like those found at nearby Angelo's, showcase a modern design, even though the rest of the place feels very turn of the century-like in appearance. Here, you'll find white tiles with a black tile trim on the floor and walls, a rust-colored marble vanity counter and faux marble stall doors -- all of which make the interior look like a modest take on the toilets experienced at the Bellagio in Las Vegas. (Though, it should be said, that the toilets here aren't in that location's league.)

It's a clean place too, though while I was there the smell emitted from one visitor in the stalls was pretty strong. (That's more the result of that visitor, of course, though had I been in the Bellagio, that smell issue wouldn't have been a problem, would it?)

Because it's upstairs, too, you don't feel the hustle and bustle of the dining room much. And while the enclave outside is very dimly lit, the toilets themselves were bright and comfortable and welcoming. 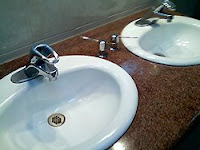 Given that, the only issue I had with the place was with the staircase leading up to it. The lighting around the stairs, coupled with the many mirrors on the walls opposite it (so that this is the wall you're staring at when you head downward) make it difficult to descend, mostly because those reflections alter your perception some. It's also like this going up too, but the effect is not as bad, since you're walking into a darker environment from a brighter one; once those qualities reverse, the scenario becomes less predictable, especially as your eyes get drawn more to the lights and bright reflections around you. 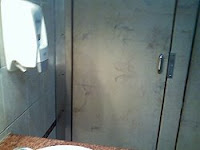 As a result, you often experience vertigo while walking down those stairs to return to your seat -- which makes the descent somewhat dangerous. And I overheard several people complaining about this while there, so I can say my experience isn't an exception to the rule.

7. Almost an 8, except for the perilous trip down those stairs after I completed my bathroom visit. 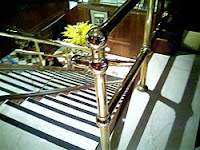 The experience itself was good, and I appreciate the old-time feel to the place, but if possible there has to be a way to make that descent a little more easy-going. Perhaps dim the lighting more for the descent or cover up those mirrors so that the climb down is more linearly presented?
at 14:25