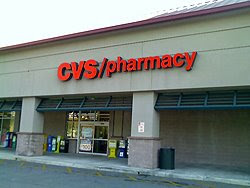 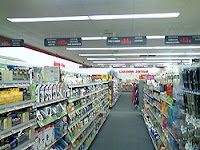 Head to the back of the store. Once there, you'll see a small hallway opening just left of the pharmacy counter. Go down there and you'll find the bathrooms.

(Or, as you'll learn below, you can just close your eyes and follow the foul smelling air to its origin.) 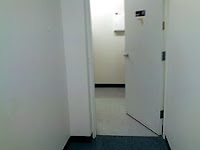 This straightforward pharmacy and convenience store is located in a new-ish shopping center in between Savannah's historic district and Tybee Island, which house the city's oceanfront neighborhoods. From the outside, it looks clean and predictable -- a strip mall store from start to finish. 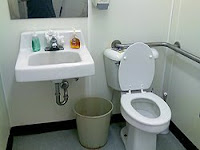 Inside, you get the same impression. The store houses a dozen or so aisles, each containing a variety of health-related and non-health-related merchandise. It's a clean store, well lit and unassuming. A standard chain store, through and through.

Head towards the bathroom, and you think you'll experience the same strip mall store nonchalance. But once you enter that hallway, things turn on you pretty quickly. The sharp smell of feces tinges the air, along with the undercurrent of ammonia. 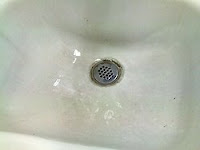 Step in further, and things get worse. The stink gets much more foul the closer you get, ultimately becoming horrifically malodorous once you step inside. (The fact that I found the door ajar while approaching the toilets didn't help, and, as mentioned above, at a certain point in the store you can literally follow your nose to the bathroom.) Piercing, hold-your-nose stink, that's what this is. Someone-just-died-in-here stink -- also an appropriate description. 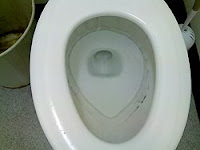 On a scale of bathroom stinkiness, I rate this one below (meaning, they are more foul-smelling) such putrid-smelling locales as the recently reviewed Pulkovo International Airport, Russian Museum and Hermitage Museum, all in St. Petersburg, Russia, Total Wine Raleigh-Triangle, or even the Awful Waffle House I visited in Walterboro, SC. And that was one of the worst bathrooms I visited this year!

What's ironic is that inside, the place looks clean on the surface. White drywall walls, bland gray linoleum floor, white toilet and sink. Nothing flashy, but nothing that would make you think it was this smelly. 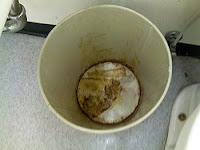 Yet standing in there less than 3 seconds, I realized that my olfactory senses would not adjust quickly to the stench around me and I quickly hurried up with my business so I could leave.

I wish I could say that the smell was the only fault I found here. Sadly, it wasn't. While the place seems clean on the forefront, a closer examination revealed plenty of disgusting elements: The toilet itself had some strong hard water stains in it, the sink had much mildew in it, and the trash can beside it looked like it had been used repeatedly as a receptor of vomit. Just disgusting. 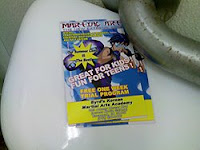 Ironically, I saw a slew of cleaning supplies sitting on the far wall opposite the toilet, sink and trash can (which were set into the same end of the bathroom) -- and all of it, apparently, looked unused. Also, there was no toilet paper or hand towels to be found in the bathroom, leading me to think that if one had to endure a longer visit here, he/she would ultimately suffer the consequences. 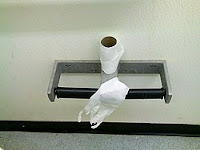 Finally, While there was no TP near the toilet, there was an abundance of fliers for a martial arts tournament taking place nearby in the coming weeks sitting on the toilet tank. Unfortunately, the fliers were made of thick paper stock, making it a poor choice for use as a wiping element.

2. Foul smells, dirty and lacking necessary supplies. A popular store like this should know better. 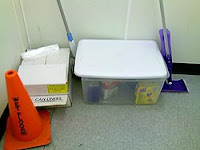 First of all, put a spring hinge on the bathroom door, so people don't have to smell the foulness emanating from this place as they approach the pharmacy. That's supposed to be a sterile environment, after all! Next, clean the place, for goodness sakes! The supplies are right there! Sure, the walls and floor were clean, but the sink, toilet and trashcan were atrocious. In fact, just get a new trashcan instead of cleaning it -- not worth keeping. Ick. And put up some air fresheners!
at 15:06

thanks for coming by my site. I have urs book marked.