"Welcome to the Awful Waffle" 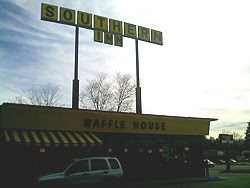 This is a small restaurant, so finding the toilet isn't difficult. After entering the building, you'll find yourself in the middle of the establishment. Ahead of you is the lunch counter and the grill. To the right is the dining room, filled with its sea of Formica tables and such. To the left is a hallway leading to the bathrooms and storage room. 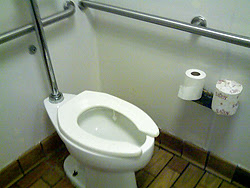 This 24-diner chain, found throughout the southeast U.S., has never been one of my favorite places to eat. The food is decidedly greasy, and the menu consists of a lot of items I would not normally eat unless I had to -- notably breakfast foods, which I've never been much of a fan of. (However, those who like their pancakes, eggs and hashbrown patties heavy with oil may find the place delightful.)

Of course, we stopped here because we were driving northward on a national holiday and nothing else was open -- and we were hungry enough to suffer through the eventual indigestion it would produce. The experience wasn't bad -- the wait staff was friendly enough and the service speedy. The food was okay -- I had a hashbrown patty with cheese and some Jimmy Dean sausage on the side, while my companion had a slice of country ham and some eggs -- not exactly the tastiest breakfast ever but not too bad either. The cuisine left only a slight bitter taste in my mouth after the fact, which was cured by some anti-acid chews and ginger ale. Yum. 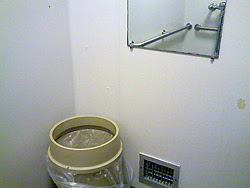 The parking lot of this place was filled with vagrants and overflow parking from the hotel next door, so I assumed the bathroom would be horrendous -- which tends to be the case when you have too many people using it too often. But it wasn't as bad as I expected it to be. It wasn't great either, mind you.

The men's room is a tidy space, maybe five foot square in size. A toilet on one side, a sink in the corner opposite that, and a trashcan in the far back right corner. It's somewhat clean but still considerably worn down, and it smells not so much of human waste but of trash and mildew -- and the smell grows more sharp the longer you are in there.

The bathroom's door is made of heavy metal and has a heavy steel latch on it instead of a lock to seal it -- my first impression, when I walked in, was that it was once used as meat locker before the storage closet down the hall was created. Clearly, this is where I'd like to be if the place were ever held up. 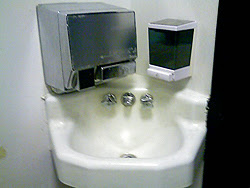 The toilet and sink are your standard white porcelain models -- clean but not exactly sparkling. The floors are covered with that horrid dull brick-colored tile you seem to see in so many places these days, though this one was cleaner than some of the other places I've been to that use it.

The highlight here is the sink, which packs in a lot of options into its corner space. It's a small sink, maybe only a foot or so in width, and above it, just over the faucets, are a air dryer and soap dispenser. Unfortunately, these items are also a bit lower than required, making it hard not to drip soap onto the faucets when applying or having water dribble everywhere when drying your hands. Still, I guess the thought is there.

4. It's cleaner than expected, but it's still pretty grimy, and that not-so-heavenly aroma of trash and mildew in the air certainly isn't something I'd like to experience more than once.

An air freshener or two -- or even some spray -- would be a nice addition. And if you can, consider lifting the hand dryer and soap dispenser a little higher, so we can actually get our hands in there and give them a proper cleaning.
at 13:41