Though Not Perfect, Toilets at DeSoto Hilton Are a Saving Grace 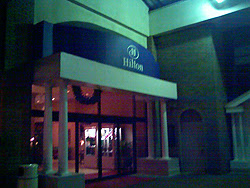 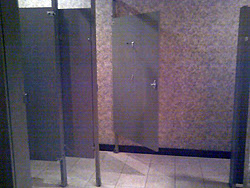 Not too tricky to find, once you get into the hotel. That latter task, however, is a bit difficult. From the street, head up on the sidewalk, then up to an elevated sidewalk, and walk under the hotel's awning. Once there, keep walking to the back of the large roundabout found there, and look for a second awning on the back left of the area -- this time over a pair of swishing doors. (Note: There is another opening for a bank to the right, and it looks suspiciously like an entrance to the hotel. Don't go in there, it's a bank!)

Once inside, walk in, keeping the concierge and front desk to your left. About halfway down the lobby, you'll see the bathrooms on your right. 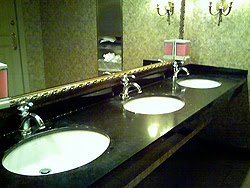 For hotel lobby bathrooms, there are very good, though nothing exceptional. However, the fact that we found them when we were in dire need (and I'm talking total hold your breath and waddle EMERGENCY!!!!) -- and that we got no trouble in the process -- gives it a special spot in my heart. Thank you, DeSoto Hilton, thank you -- because of you, I avoided surefire embarrassment. You're a hero in my book.

See, we were in Savannah for a weekend and walking around the town, heading to a ghost tour. Naturally, it being a ghost tour (we did with Sixth Sense Savannah Ghost Tours, which were fair but at times kind of overdone as well, www.sixthsensesavannah.com -- 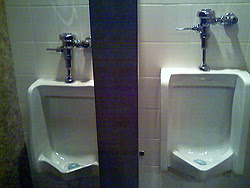 and the experience was made worse by the fact that it's a walking tour and a member of our group had some serious gas issues, which he wasn't shy in sharing), it takes place in some desolate areas, and the meeting place we were told to start the tour was in a pretty sketchy spot to begin with. Thus, when the urge to hit the bathroom came, we were literally up a creek (and you know what type of creek) and didn't know what to do. Everything around us was closed, except the 7-11 in cracktown, and that certainly wasn't an option. 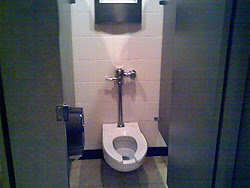 So we started rushing back to our hotel, scrambling and trying to keep our wits about us. After a few blocks, we found this woman dressed like a Rockette in a Santa suit on the side of the road. Now, normally when we see a woman like this on the side of the road, we just avoid her, because we're not really into that sort of stuff. But this time, we couldn't afford a delay.

We asked her where the nearest bathroom was -- and she thought and thought and thought. It was brutal, waiting for that answer. And then finally she let out with it -- DeSoto Hilton! "Take a left at the next intersection and it's right there!" 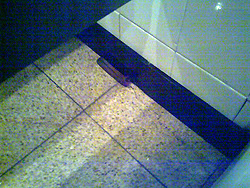 We rushed there and just made it, and the fact that it was clean and receptive made it all the more impressive.

It's a long bathroom, with three stalls and three urinals set across one another. A vanity is set at the front, when you walk in. Marble tile covers the floors and most of the walls -- other areas are covered with clean white tile. The vanity is made of a solid slab of marble. The sinks also have wonderful smelling soap and ornate faucets with fancy trim. It's a decent bathroom. 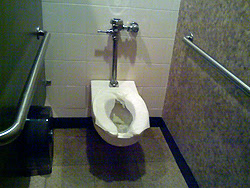 Of course, it also has some faults -- the worst of which is that the toilets sit very low to the ground -- like less than a foot. So when you sit down, you immediately fall, which is somewhat unexpected, especially when you're in dire straights. It's also especially hard to get up from the toilet after relieving yourself (you know how your legs just kind of go, right?).

Also, I found this strange brown paper object behind the commode -- no idea what it is, and it's been bugging me. (If anyone has any ideas, feel free to comment.) I poked at it with my shoe and it didn't move. It wasn't squishy though. Very perplexing. And frightening! 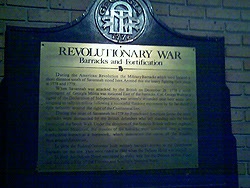 And finally, the third stall (which I headed to first) was empty but looked like it'd just been used -- and the toilet was stuffed with you know what and the seat liner was just sitting there..... very gross. Other than that, the place was spotless and smelled great, thanks to a floral air freshener.

On the plus side, when you leave you can read a plaque in the roundabout stating that you've just pooped on a spot that carries some importance to American history. The hotel was a site where the US army placed barracks and other military fortifications against the Brits during the Revolutionary War -- which I find ironic, because after my visit I also left some barracks and fortifications there. HAH!

9. Really a 7, but it was such a saving grace that I had to lift the score. Thank you, DeSoto Hilton, thank you!

So perhaps they don't patrol as often as they should, and perhaps there are unidentifiable brown things on the floor -- who cares? THANK YOU FOR BEING THERE FOR US, DESOTO HILTON. Next time I'm in Savannah, I'm definitely staying with you! If things turn badly, I might never leave!
at 16:09