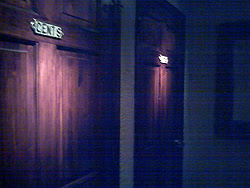 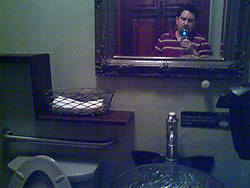 The restaurant is split into three distinct parts: A bar or pub area, a modernly dressed main dining hall and a smaller, brick-lined dining room that opens partially to the kitchen's finish line.

The bathrooms here are found in the back of the second section -- the main dining hall. To get there from the entrance, head into that second chamber (so to speak), turn left and head to the very back of the restaurant. You'll find a small enclave there on your left -- the toilets are there. 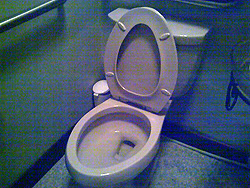 This "American gastropub" is one of Orlando's newer, and trendier, eateries. Unfortunately, sometimes its ambitions get in the way of its results.

The decor here supports its ambitious sensibilities, offering something that is familiar, swanky and exotic. You'll find bronze-tiled ceilings, translucent sheets of plastic hanging from the ceiling and curved modernist furniture alongside more down-to-earth pub tables and a heavy wood bar serving plenty of upscale beers and wines. 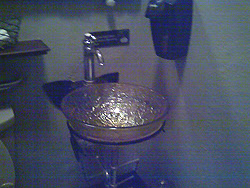 Given that, it's not surprising to learn that the menu aims to please two palettes as well: Half of the offerings here are pub fair prepared with gourmet twists (mussels with truffle fries, the underwhelming lobster tacos, house-made soft pretzels), while the other half (the regular dining menu) boasts several high-end creations, many of them seasonal in origin (an impressive steak frites -- again with truffle fries -- a not-so-impressive olive-crusted lamb tenderloin). When the food succeeds, it does so glowingly (like the aforementioned steak or the sublime quail and raisin appetizer special I had on my visit). 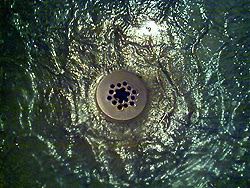 But at the same time, more experimental dishes (like the lamb, or the suckling pig over sweetened collards) tend to get lost in the ambitious shuffle, mostly because they seem to forget what they are about. The lamb, for example, should have had the flavor of lamb at its center, but instead the dish seemed to be trying hard to mask that. The same could be said for the pig, which started as a unique diversion to a traditional dish, but as the meal continued I began to miss those traditional flavors and wished they would return, even if only for a moment.

Having said that, I don't mean to say that the quality of the food is poor. It's not. The chefs are talented and creative, that's for sure. But their dishes, at times, make you long for something less ambitious and trendy. Perhaps that's why the steak frites was so delicious -- it was simplistic compared to the other dishes we tried, and that in turn seemed like a revelation. 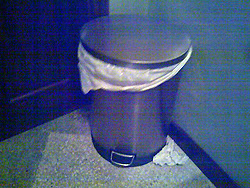 Bathroom-wise, it's a similar story. The toilets here aim to be trendy and hip but forget some of the of the basics. First of all, let me say that they are very dimly lit, so much so that it takes a moment for your eyes to adjust.

These are "one baggers," narrow and a bit tight. The walls are painted green (I think -- it was pretty dark in there), the floors covered in dark tile. A strip of wooden molding rounds the middle of the wall as an accent. The toilet, a standard white porcelain model, sits cozily in a frame concocted out of that molding and a shelf overhead. The glass sink is one of those flashier wash-basin-look-alike models we're everywhere these days (most notably, of late, at Mr. K's Chinese Cuisine); it's fitted into a glass vanity counter sort of thing, with metal spigot/faucet overhead. A wood-framed mirror hangs overhead. 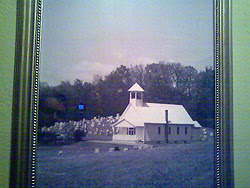 The toilets were somewhat clean but could have been more spruced up. The dim lighting made it seemed dingier than it probably was. I found mis-thrown garbage and water on the floor (which wasn't easy, considering how dark it was inside there), and I also noticed that the drain piece in the sink was cracked, which of course made me wonder what else might be broken or nearing a state of disrepair here (perhaps it's dark there for a reason?).

Also worth noting: For decoration, the bathroom had a framed picture of a church cemetery on the wall, which added an air of quirky creepiness to the proceedings. Not sure why they chose that for art -- perhaps it's best not to ask. Needless to say, the dim lighting and cemetery imagery made me want to hurry up and get out of there as quickly as I could.

6. Not a bad bathroom, but for some reason I was expecting more (especially considering the ambitiousness of the place). The dim lighting didn't help the score -- in fact, it only made me wonder what was wrong there.

Increasing the lighting might be a good step. Not extensively, but at least enough so I don't feel like I'm in a closet. Next, consider replacing the items that are wearing down or broken. Also, like your menu, don't forget the basics -- style doesn't always win over substance.
at 14:01