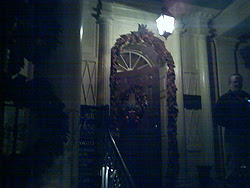 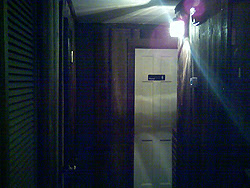 The restaurant's bathrooms are on the second floor but because the elevator wasn't working and the stairs were shared by both the wait staff (carrying large trays of food) and customers, I opted to hit the bathrooms in the Planters Tavern, which is in the basement of the building. There are stairs heading that way from the dining room, but the easiest way to get there is to go outside, decend the stairs to the tavern's entrance, and walk across the tavern (keeping on the same side as the entrance) and into a dim, wooden hallway there. The bathrooms are down that hallway. 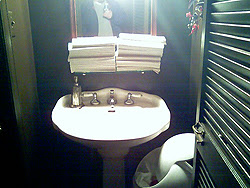 This establishment was built in 1771 and, according to the plaque outside signaling it as one of America's historic landmarks, over the years it's been a military headquarters, a private home, a bank, a tea room and more. Today, it's a decidedly old-fashion restaurant and tavern, decorated in dim lights (and often candlelight) and heavy wooden furniture and filled with creaky wooden floors and antique portraits on the walls. Think American Victorian, and you get the idea.

The menu here is filled with gourmet takes on low country classics: A fabulous scored flounder covered lightly in apricot sauce; a succulent rack of lamb served with seasonal, locally grown vegetables; expertly prepared side dishes like Hoppin' John (rice and black eyed peas, essentially), sauteed grits cakes and more. It's elegant, sophisticated and somewhat reasonably priced, considering its a the gourmet meal (expect to pay about $40 per person). Definitely worth the splurge. 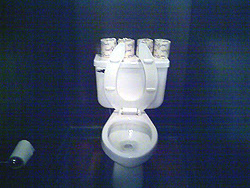 The tavern downstairs is dark and decidedly colonial. The walls here are made of deep, dark wood, and only a few dimly set lights and a lone, welcoming fireplace illuminate the interior. The tavern serves the same menu as the dining room, only in a more intimate, casual setting. The bar is just a bar -- no specialty brews or anything -- and drink prices are a bit high but the ambiance is so inviting it doesn't matter. It's one of those places you feel honored to have a drink in. Next time I visit, I hope to have dinner in the tavern as well.

Or course, while the dining room and tavern are very colonial, the bathrooms have a strange nautical feel to them. They are dark, like the dining room and tavern, but they are also elongated, narrow and small, like the bathrooms found on a boat. (Not as thin as Cafe Tu Tu Tango in Orlando, mind you, but still pretty thin.) The men's room is a long, thin rectangle, with the toilet on one end, the sink on the other, and an empty stretch of about six to eight feet in between. The walls are brown wood here, like the rest of the tavern, and the only decor is a picture of George Washington, which hangs over the toilet. Also noticeable are the mass amounts of supplies found here -- on my visit, the toilet was literally covered with spare toilet paper rolls, and the sink had many fresh paper towels sitting atop it. Clearly, they are expecting the worse here. 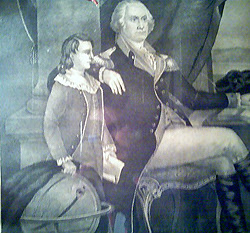 The facilities were clean, though a bit worn down from the day, which I guess was expected since we had a late seating upstairs. They are also somewhat removed from the tavern area, and though the tavern isn't exactly boisterous, it can get a bit noisy, and as a result the toilets do offer some solace to the visitor.

8. Essentially a 7, but the colonial decor and feel are so impressive I had to raise the score a notch.

It wouldn't hurt if these toilets were a bit wider, but that might involve a serious renovation, which would take away from the place's charm, so what can I say? And I would suggest placing a storage cabinet in the bathroom somewhere -- but where? Even a small, narrow cabinet would blog access to half the bathroom.
at 16:46

I chanced upon a website one time, it featured toilet spots in Australia, when if one is on the road, he doesn't need to ask around if he needs to use the John. HE can check online or print out a map from the site.I forgot the sitename though..