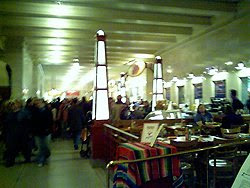 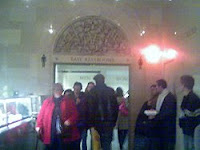 Head to the station's food court (which is a trip in itself, though if you follow the signs and try not to get swept up in the waves of people floating about, you'll make it without much trouble). Once there, look for the Zocalo food stand. The entrance to the bathrooms is down the hallway to the left of that stand. 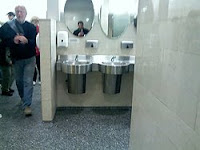 As most people know, Grand Central Station is one of the largest and busiest train terminals in the U.S. It's a sprawling building filled with ornate architecture, towering arches and countless shops, eateries and stores tailored to the passing-through traveler.

The food court bathrooms, as you can imagine, are large, noisy and hectic -- some of the busiest I've experienced. And I imagine they're always like this, not just at select times (such as the dreadful toilets experienced on the Florida Turnpike at Ft. Drum and Port St. Lucie, which were busy during one visit and not so busy the next). 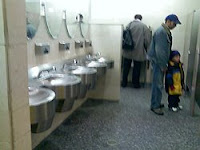 Of course, this being New York and Grand Central Station, a hub for public transportation (which normally doesn't offer much luxury in terms of bathrooms), you don't expect this place to be very friendly, clean or accommodating. That wasn't the case with the men's room. While it was certainly very busy, I found the place cleaner than I thought it would be and everything in working order. 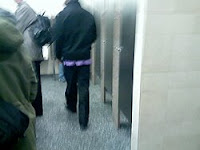 This is a "P"-shaped facility (no pun intended), with the stem being the entrance corridor. When you walk in, you first see a row of urinals (about 4 of them) on the left wall. That's the base of the "P." The opposite wall has another set of urinals there.

In the center (around the loop of the letter, if you will) are two rows of sinks and mirrors, one facing the back wall and one facing the front wall, with a marble wall separating them. Across from each row of sinks are stretches of toilets. Marble dividers separate everything cleanly, and marble covers the floor as well.

The place is well lit. The sinks are made of stainless steel and in many ways look like a string of stock pots placed beside one another. The mirrors over them, one to each station, are oval in shape and well lit. Stainless steel doors serve as the toilet stall door, with the same marble dividers walling off each toilet area to ensure each visitor has some semblance of privacy. 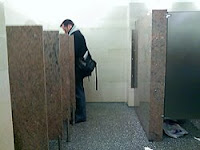 As said, this place was pretty clean on this visit, a surprise considering how busy it was. (I had to fight through some crowds to get to the sink to wash my hands, and then I had to do the same when I wanted to leave.) Sure, I saw some mis-thrown trash, some spilled water and whatnot, but I really expected it to be a lot worse -- like what I experienced on the Florida Turnpike at Ft. Drum and Port St. Lucie.

Outside of the hectic nature of the place, which I doubt can be fixed, given this is NYC and Grand Central, I'm not sure there is much I can offer in terms of help, since my experience was a good one here. Still, my companion (who used the ladies room) said it was horrendous in there, one of the most disgusting bathrooms ever visited and said she was literally jarred by the experience. (She refused to write about it, though.) However, without specifics I have little to recommend.
at 12:52