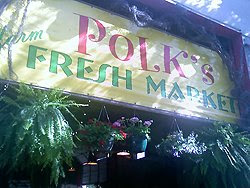 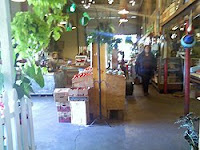 This warehouse market has several openings. The easiest way to find the bathroom is to enter from Liberty Street itself. From there, walk to the rear of the place, keeping the cashier on your left and the various fresh veggie tables, displays and coolers on your right.

The further back you go, the more industrial the surroundings seem to get. Don't be deterred by this -- you're still going the right way. A kitchen will appear on your left and an open-air garden (housing various plants and such) on your right 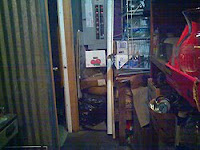 (which can be accessed through an opening large enough to fit a delivery truck). Keep going back and to the left (just don't imagine you're in the movie JFK), and eventually you'll see a small office on your left and a tight-looking hallway beyond that. Go down that hallway and you'll find the toilets. It will look like you're going into a supply closet, but you're not. Just keep going down that hallway and you'll see the signs. 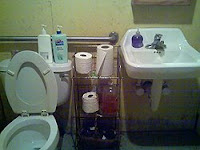 A short funny story about Polk's Market: I travel to Savannah about two or three times a year for long weekends and getaways, and each time I've gone, I've tried to hit Polk's Market, because all the restaurants in town keep telling me that they get their veggies from Polk's and that it's the best veggie/farm stand in the city. And, of course, being a big eater (and toilet visitor), each visit I make to Savannah makes me more and more eager to visit Polk's because of that.

But the damn place has never been open! Not a once. So, naturally, this has made my expectations (it's not just a farm stand but an exclusive farm stand at that!) pretty high. 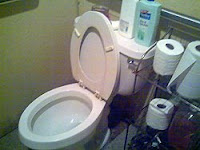 So on my last trip to Savannah, I finally found the place open, and I didn't hesitate a minute to go inside with the hope of stocking up on the many delicious veggies and other regional goods sold here. And, as with all situations like this, I was disappointed with what I found. Perhaps it was because the harvest season was long gone, or that it was Saturday and most of the restaurants had already snatched up the best items, but either way there were few things of interest here (at least not anything I couldn't get back home, which made buying them kind of silly and irrelevant) and also found many of the shelves low on supply. Disappointing to say the least. I'll have to try again in summer or early fall, I guess. 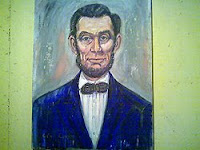 Now, as mentioned earlier, this is a warehouse store set on a street of brownstones and various other warehouse stores. Inside, it looks very much like a warehouse (counters, coolers, display tables, shelves, wooden crates housing various veggies and fruits, etc.), but at the same time it carries a sort of hippie vibe: Lots of oranges and greens and browns, earthy and homespun decor -- which I guess is the point, since it's a farmer's market, right?

The toilets extend that theme with much vigor, so it seems. This roomy one-bagger (for both men and women) features yellow concrete walls, gray tile floor, white porcelain toilet and sink, and a wrought-iron rack to hold various paper goods, like extra TP, paper towels and a surprisingly extensive amount of hand lotions (huh?), as well as some makeshift shelving to hold other items, like air freshener. 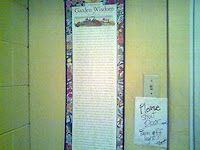 The walls are covered with novelty signs (like one sharing some "Garden Wisdom" or showing poster art from a city festival) and some locally produced art (including a cheeky portrait of Abe Lincoln). Cute, homespun, kitschy -- much like the nearby Soho South Cafe (reviewed next week), only not as over the top. Whereas that location is art-centered in its intentions (and I mean that in the best way possible), this one is more organic and down to earth in its need to express itself. For that, I commend it.

As markets go in terms of bathroom creativity, this one stands high over places like the Little Pee Dee State Farmer's Market, Harris Teeter Raleigh and Fresh Market Orlando. It's cleaner than those and certainly has more personality and charm. 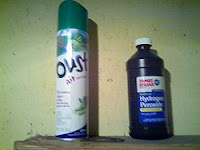 However, the room itself is somewhat stifling and holds odors better than it should -- no doubt the result of the room being in the very back of the place, which doesn't have much in terms of ventilation. Also, closer inspection reveals a good deal of wear and tear. Also, because the market itself is often open to the outdoors, I imagine the room in summer can get a bit stifling with heat -- again, because of a lack of ventilation -- and with that, no doubt, comes the influx of various seasonal insects, if you know what I mean. (That's an assumption, of course, but I don't think I'd be too far off the mark in suggesting this.) 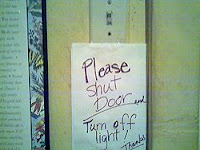 Also, the place carries a strong plant-like smell to it, most likely due to the products it sells (or perhaps the sprays it uses to keep bugs off those products). The smell isn't that bad, but it's noticeable and a little too chemical-heavy for what I'd like to experience in a bathroom. (Though it's nowhere near as sharp as what I experienced at the Little Pee Dee State Farmer's Market.)

Of course, this being a hippie-inspired place, you're bound to find some oddities, and I did. For one, next to the air freshener, I found a bottle of hydrogen peroxide -- a first in my toilet-reviewing experiences. Why was it there? What purpose did it serve? I do not know. Though seeing it there, I was instantly reminded of my confusion over the tube of foot cream I found at the Nile Restaurant bathroom in Orlando. 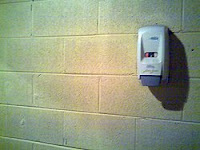 Also, I was greatly amused by the sign beside the light switch, which itself was by the door. It read, "Please Shut Door/Turn Off Light." I am assuming this is a reminder to those leaving, but seeing that it's the first thing I saw when I stepped inside, closed the door and turned on the light, it made me chuckle some -- am I not supposed to pee with the door shut here? Or should I pee in the dark? Hmm.... (And, on a related note, what's with all the directional signs I've seen at Savannah restaurants of late? I'm looking at you, Molly MacPherson's!)

Finally, I have to point out the fact that the soap dispenser is on the complete opposite side of the room as the sink, making lathering up your hands a bit of a chore. Why is it that way? I can't say. But I laughed about it afterwards -- after I tracked water and soap all over the floor, that is. Sorry.

7. Borderline 7, that is. Not a great or spotless place, but it's kitsch factor and charm raised the score some. Now if only I'd found a better veggie selection when I'd visited.....

Could be a little cleaner here, and the soap dispenser could be placed closer to the sink. But more importantly, you may want to boost up the ventilation here so that more fresh air gets in. The place needs it, I'm sorry to say.
at 14:19